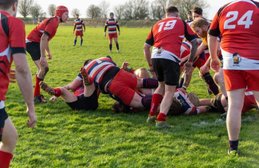 A game of two halves!

Lakenham travelled away to Broadland on a bright but blustery day for a match that can only be described as a game of two halves....
Broadland won the toss and played with the wind and it was they who dominated the early passages. They were rewarded with a try early on and took a 5-0 lead.
Lakenham hit back strongly and after some sustained possession, and strong carries by Will and Dors, got a penalty 20 out which Jordon kicked for 5-3.
Broadland were dominating the scrums and ruck area though and managed to bust through with great support for a couple more tries.
Again Lakenham hit back as Sheehy jinked his way through the line and rolled back the years to dash 40m into the corner for Lakenhams first try of the day.
Unfortunately from there the Broadland pack gained ascendancy and following a few more tries took a 38-8 lead into half time.

Lakenham needed to step up half time and really put an effort in, and that they most certainly did.
Using the wind to their advantage they were able to pin Broadland back in their half. Following a pick and go by Damo which put is on the front door, Jordon hit Sheehy who found a gap and two great offloads later Ali crashed over for the first points of the second half. Jordon converted for 38-15.
Following more sustained Lakenham pressure and territory Cookie picked up a loose lineout ball and crashed his way through multiple defenders to score from 20 out. Jordon, again, nailed the kick for 38-22.
Lakenham would go close one a few further occasions with Sheehy and Dors both being held up, as well as some surging runs by Kristian from the back.
Cookie wasn’t finished with one try though! Getting the ball 40m out he went into full beast mode and must’ve broken through a good 10-12 tackles to score an excellent try. Jordon, who was faultless with the boot, converted again for 38-29 with 6 to play.
Will caught the kickoff, and not to be outdone by Cookie, left a trail of forwards in his wake as he set off on a 30 meter run. Unfortunately Broadland gained possession shortly after and began to wind the clock down with numerous pick and goes, which were repelled by some strong defence by Aaron, ginger Tom and Warren - who is undoubtably the most consistent player week in week out for Lakenham.
Lakenham were finally able to get their hands on the ball on halfway but an error meant a Broadland scrum right on full time. Lakenham weren’t done however, and after and a massive scrum their 8 was forced to pick the ball under pressure. Sheehy turned him over and fed the ball back to Will for another strong carry. Some great phase play and strong carries by Dors and Ali lead to a Lakenham penalty 38m out with time up.
Being 9 pts behind they opted for the 3 to secure a second bonus point and Sheehy drilled it over the back dot for 32-38 at full time.

Every player in red and black should be immensely proud of that second half performance (24-0!). We have laid a marker now of what we’re capable of and should fear no team in this league.

Sheehy: Dod- Kristian - for trying to stop a ball going into tough by diving full stretch
, as if fielding in the gully, and shelling it forwards