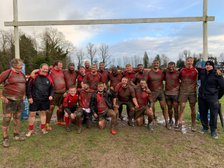 Mud wrestling with a hint of rugby!

This Saturday Lakenham travelled to a historically strong Diss side, looking to redeem themselves for last weeks frustrating loss against a good Broadland outfit.

The conditions were horrendous, torrential rain over the last few days making the pitch pretty much waterlogged with blades of grass on the pitch a rarity.

The first 10 minutes were simply a war of attrition, both sides carrying hard and defending brilliantly.. However it was compounded by numerous errors from both sides.

Lakenham pressure led to a penalty in front of the sticks converted by Jordan Holland to put Lakenham 3-0 up.

With Lakenham becoming dominant in the scrum and starting to make yards with some hard carries, the first try was scored.
An outstanding scrum from the forwards, brilliant hands from the backs allowed Kristian Boreham to touch down.. Another Jordan Holland conversion made the score 10-0.

With the conditions worsening, Chris Sheehy produced a stunning display of kicking out of hand, forcing Diss to continuously turn in their own 22.. Fantastic work from Irish Pete with some outstanding tackling and Olly Mills and his awful fringe both working hard on the kick chase.

With some hard carries from James Cook and Will Bartlett, Lakenham scored their second try through Ali Mckenzie.. Finding a line where the defence parted like the red sea to score untouched under the sticks.. 17-0 Lakenham.

Lakenham could be forgiven if they were to sit back and see out the half, however they scored one more try.. Chris Sheehy popping it to Dan Baker on his outside shoulder who went on a magical 3 metre run to touch down.

The second half was a much quieter affair, it was more a case of effective game management. Chris Sheehy continued to force Diss into their own 22 where multiple errors led to Lakenham regaining possession.

However midway through the second half Lakenham secured the BP win.. an exquisite chip over the top from Sheehy led to Boreham dotting down for a brace.

The final quarter was very much dominated by Diss, credit to them.. they never backed down and pressed right up to the final whistle...

The defending however was fantastic.. James Cook hitting hard.. Mike Barber just being a general nuisance and the backline not giving an inch!!

Big thankyou to Diss for hosting, the atmosphere afterwards was fantastic and as Mr Sheehy said 'Diss reminds us of an old school rugby club'