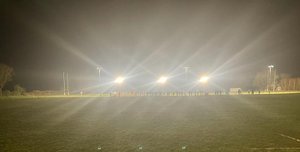 Medics boasted a strong squad for the fixture and an especially dangerous backline who are capable of putting plenty of points on any side in this league.

Medics were playing with pace on the ball, making it clear they could back themselves to beat us on the edges.. Some fantastic build up play from the Medics backs unfortunately did not come to fruition with small handling errors at critical moments denying them a couple of tries.

This galvanised the Lakenham attack who swiftly added another through a barnstorming run from Jack Codling who left multiple defenders on the floor to touch down.

It seemed like it would be a simple shut out for Lakenham, until just before halftime.. some fantastic backs play from the Medics put their winger in the corner..Medics were definitely still in the contest.

That wasn't to be the end of the scoring though.. some great work from the forwards gave Chris Sheehy the platform to score another fantastic individual try just before HT..

The second half became nervy affair, Tom Russett came off after 50 mins with probably his greatest performance in a Lakenham shirt and with some changes Lakenham struggled to maintain momentum.

Medics started to establish a foothold in the contest, scoring two tries in quick succession.. the quality of step shown by their 13 belonging in a much higher league than EC2.

It was one hell of an effort from the Medics in the 2nd half!! Their forwards started making big carries and their backs giving us the run around on a few occasions.

With the score at 26-17 Lakenham managed to score towards the end to secure the win... A kick through allowing Olly Mills to touch down for another try.

What a game, what an atmosphere!!
Medics had plenty of support and were fantastic opposition!! They definitely do not belong in the bottom half of the table with the players they had on show!!

Plenty for Lakenham to work on but yet another quality performance!!

On a fantastic weekend of Rugby, Lakenham Ladies also won the Norfolk derby and completed the double over Wymondham.. Final score 14-5