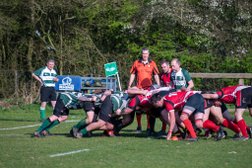 Lakenham Hewitt traveled away on Saturday to face a decent looking Norwich Union side underneath a blazing sun and on a hard, fast track.

Lakenham kicked off and it was NU who started strongly and they broke through immediately, only being thwarted by a great last ditch tackle by Sam.

Lakenham gained some control from there and were camped on the NU line. Following an NU clearance Irish Pete when on a rampaging run, beating multiple defenders along the way, before an error led to an NU scrum and feed 5m out. While trying to clear their lines Tuckett extended his levers to charge the kick down and Arturo was on hand to muscle his way to the ball and dot down for the first try of the day. Conversion made by Holland for an early 7-0 lead.

Lakenham were straight back on the attack and unlucky to have two further tries questionably chalked off but the pressure finally told as Barber was on hand to power over the line, and with another conversion, a 14-0 lead.

Lakenham continued to apply the pressure and following some good lead up play by the forwards Sheehy found McKenzie in space and he scythed through the NU defensive lines to score a brilliant individual try under the posts. Conversion made, 21-0.

The final points of the half would come shortly after through a Holland pen right on half time and a 24-0 lead.

Lakenham got the second half going with a few penalties and kicks into the corner and they would spend most of the second half applying pressure to the NU line.
The first try in the second half finally came with some slick passing through the backs and a great cut out ball from Dors to Oli to score his first try in a Lakenham jersey. Holland added the conversion from wide left for 31-0.

Following more sustained pressure and some strong forward carries Lakenham were awarded another penalty 5m out. Lakenham elected to tap and go and Jack was on hand to smash his was through the NU defence for another 5 pointer. Conversion once again made, 38-0.

The final try of the afternoon came after some more brilliant lead up play by the forwards and ended with Sheehy spotting a gap and cutting through for the try. Conversion hit the upright for a final score of 43-0.

On the whole it was a very impressive Lakenham performance. They came up against a strong NU pack but didn’t give an inch and this allowed the backs the time and space to put together some great passages of play.
NU were, as always, great hosts and many thanks for their hospitality.