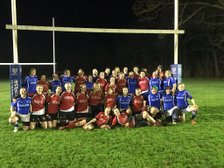 Lakenham Women headed over to Diss for a Friday Night Lights game as the semi-final fixture in the Norfolk Cup, captained by Beth Atkin playing at flanker. With several players out for injuries and Covid, the team had an opportunity to try out new players for the first time, and for more experienced players to get experience in new positions.

Diss were out for the warm up first, looking organised and focused as they went through their drills. A few minutes later the Lakenham team made their voices heard as they completed passing drills and team run throughs. The gathering crowd were getting excited for what would be an exciting evening of rugby.

The match kicked off at 7:30pm with a classic Lakenham war cry led by flanker Jenna Ray, and within just a few minutes centre Dani Pluckrose touched down the first try. A valiant kick from fullback and vice-captain Lucy Williamson fell short of the posts to leave the score at 5-0.

A knock on and a scrum, with Diss winning the ball and making a strong run up the pitch, but the ball was quickly back in Lake hands. A great carry from hooker Lizi Williams, the first of many from her, followed by a knock on and yet another scrum. Luckily this wasn’t a problem for Lakenham who really showed their experience and power with a huge drive. Some fantastic rucking from second row Lizzie Blisset, Ray, and number 8 Katelyn Wall was not quite enough and Diss made another great run up the pitch, only to be stopped by Laura Fearnley making her debut as fly-half. Another powerful run up the pitch for Pluckrose and Lakenham were back inside the Diss 22, who were putting in some really big tackles. However Lakenham’s whippet Williamson ran the ball over the line for the second unconverted try of the match. 10-0.

A good steady attack from Lakenham, and bolstered by the opening performance, Williamson made another speedy run to touch down right under the posts for an easy conversion and 7 more points. Just 16 minutes in and the score was 17-0 to the visitors.

Lakenham were on a roll and a big run from Ray got the crowd making some noise, however a strong tackle by Diss stopped her in her tracks. Being a relatively new team with very little game time, Diss hadn’t quite got the hang of some of the rules around rucking, and gave away a penalty here to Lakenham. A quick tap and beautiful hand off saw Pluckrose score her second try of the match putting the score at 22-0.

20 minutes into the first half and Lakenham really found their stride. Confident runs from Fearnley, Williams and Wall, with the ball once again ending up in Pluckrose’s hands for a try under the posts, converted by Williamson. 29-0.

A good run from scrum-half Emily Wilson supported by second row Sian Keepin saw Lakenham make some good ground, culminating in a scrum on the Diss 5. A huge push and flanker Ray manages to touch the ball down over the line for another 5 points. 34-0 with 10 minutes until half time.

After some concerns being raised by spectators about the suitability of the Lakenham 8’s shorts, another big run by Pluckrose and great support from the backs saw Williamson take a try and conversion for herself to make it 41-0.

Just three minutes later and Pluckrose decided to sneak another try right under the posts, with Williamson easily securing the extra 2, for 48-0. A strong run from Keeping before the ball goes out of play to close off the first half.

The half time talk focussed on encouraging the team to maintain their structured play and keep the score line to zero. The team were also keen to involve the backs more as the first half had been dominated by big powerful runs through the Diss defence. Now’s the time for some fancy footwork and light hands! Just a couple of changes, Charlotte Richardson coming off after a great game at tight head prop, with Jess Lowry making her Lakenham debut. Hannah Ellis went into the backs at number 12 after spending the last few games in the pack, with Pluckrose into second row and Keeping taking a break.

Good structured play during the first 10 minutes saw Lakenham maintain possession, with notable performances from Blisset and winger Josie Maidment, but some great defence from Diss stopped Lakenham from making it over the line. Amazing pod work and great communication between Wilson at 9 and Fearnley at 10 saw winger Hannah Clarke run the ball over the line for an unconverted try, 53-0.

Diss seemed to find their stride in the second half, stopping the strong Lakenham runners with some big tackles. A brief period of chaos while Lakenham adjusted their tactics to cope with the evolving home team, and coach Dan Baker was ready to make some more changes, taking advantage of the rolling subs. Lowry was off after a great first appearance for the team, with Richardson back in at prop after a well earned rest. Clarke came off the wing to give Rachel Hawksworth her first taste of rugby.

20 minutes into the second half and Pluckrose made another strong run, but didn’t manage to get far enough. Keryl Watkinson, who returned as loose-head prop after a short break from rugby, came off the pitch after an exhausting game dominating the scrums to give Gill Hewitt a run out, back from a knee injury earlier in the season.

Some strong running from Lakenham after another successful scrum, and Williamson made a last minute pop to Rachel who was tackled just short of the line. Diss managed a big kick up the pitch, and a fast chase by Ray saw the ball back in Lakenham hands. A brilliant carry from centre Nicci Dixon and a pop to Williamson who scored again after some fancy footwork to make it 58-0.

Diss really dug deep here and didn’t let the score line get their heads down. More strong tackles stopped good runs from Williams, Richardson and Wall and the play was all inside the Diss 22. Ellis with a great demonstration of her versatility, running through the Diss defence to touch the ball down by the posts, making the conversion easy for Williamson. 65-0.

Dixon confidently picked up the ball from the kick off to pass to Ellis who found a gap in the Diss defence. The ball was passed to Pluckrose again but she was stopped by a high tackle. Lakenham were unable to score from the advantage and the whistle blew for full time at 65-0, putting Lakenham through to the cup final on April 30th.

A big thank you to Diss who were fantastic hosts, and we wish them all the luck and rugby love as their team continues to grow.

Lakenham players of the match were Lizi Williams and Lizzie Blisset, with Diss also selecting Katelyn Wall for the honour.