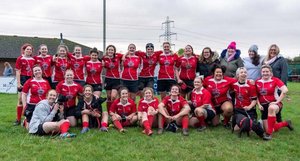 Sunday 3rd November saw Lakenham Hewett host the ladies game vs Harwich who made the 2 hour journey. Conditions were perfect for Sunday rugby and fielding a full squad of 22 the Lionesses were confident and ready to follow on from their previous performance and aim for 2 consecutive wins.

Lakenham took the kick off from the whistle and chased it down the pitch. Immediate tackles were executed by winger Hannah Ellis and flanker Chloe Travis. The back row were ferocious around the breakdowns, managing to gain the turnover from the ruck area. Lakenham powered into the defence using the strong ball carrier team of number 8, captain Dani Pluckrose and fly half and vice captain Lauren Halliwell. The ball was passed down the hands with a monstrous tackle on centre Josie Maidment seeing the forwards locked in a battle of strength contesting over the ruck area but Lakenham showed their worth and gained the penalty. The quick tap and go saw the home side gain metres and the ball was worked out wide landing in the hands of new winger Millie Clarke who piled into contact. The ball was turned over in the ruck area but H&D Owls knocked the ball forwards seeing the first scrum of the match. The scrum was fairly evenly contested but the visitors managed to regain possession and flew the ball along the hands and found the overlap managing to place the ball over the line for the first try of the game. Moments later the Lionesses responded with sending 8 Pluckrose bulldozing over the line. The half appeared to be fairly even until Harwich sent their full back for a run just before half time who managed to plant the ball down seeing the half time scoreline at Lakenham – 5 Harwich – 14.

The second half saw Lakenham immediately in possession and the ball was ran into contact. A knock on saw the game stopped for a scrum. Harwich took the ball and moved it through the hands to the winger who flew up the pitch and straight into a devastating tackle from Full back Laura Fearnley. Taking their time from the breakdown, Harwich appeared composed and shipped the ball out, managing to find gaps in the red defence to score out wide which went unconverted. Undeterred, Lakenham reset and chased the kick, forcing the turnover early on and using big hitter flanker Jess Underwood to run the ball at the defence managed to create a gap which she slipped through to score another 5 points for Lakenham. Lakenham appeared to be able to up the tempo and worked tirelessly to move the ball along the pitch but Harwich's number 8 had her own ideas and won the ball which was worked over the line to score their final try of the match. The Lionesses were ready from the reset and managed to force a knock on from defensive pressure. The ball was ran out the back by 8 Pluckrose before being offloaded to flanker Chloe Travis who managed to draw in the defence with a powerful run. A well timed pass to MOM winger Alana Carpenter saw her able to accelerate to full pace and plant the try down wide. Resetting and excited, Lakenham ran hard and repeated their previous performance but this time it was Jess Underwood who drew the defence and offloaded again to winger Carpenter who flew up the pitch to score just before the final whistle for full time seeing the scoreline as Lakenham – 20 26 – H&D Owls

Thank you to Jake Marshall and Richard Polley for the photos!
Special mention to Dan Baker for sitting in the freezing cold with a video camera to capture our performance!
Players of the match this week are: coaches player, Chloe Travis. Players player, Alana Carpenter
Thank you to all of the new players who keep the team fresh, exciting and kick ass on that pitch!
Always important to mention the dedicated spectators who brave the weather with flasks, winter coats and thick socks to cheer us on!

Lakenham Ladies would like to say a heartfelt and tearful goodbye to key player number 8 Dani Pluckrose who has travelled to France to work. We will always miss our hard hitting, 92 shirt wearing back row player and we look forward to having you back!