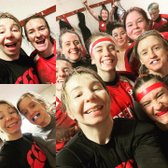 With kick off slightly delayed until 2.10pm, Lakenham Ladies took the opportunity get their heads in the game before the whistle blew. Lakenham headed straight into the game, showing a great physical presence at the breakdowns and were the first to put points on the board. Number 8, Dani Pluckrose received the ball, palming off any attempts to tackle her and placed the ball over the line just 5 minutes into the game with the conversion being scored by Fullback Lucy Williamson. West Norfolk kicked off with the ball flying deep into the Lakenham half, however this was gathered up and retained and a few phases later, another try was put over by Dani P. Lakenham were relentless with their attack, keeping West Norfolk in their own half and putting a further 2 tries on the board from newcomer Hollie and Lucy, both being converted. Half time saw the scoreboard at 26-0 to Lakenham Hewett.
The second half saw a fantastic comeback from West Norfolk. After keeping Lakenham at bay for around 15 minutes, West Norfolk managed to find their way to the try line, putting themselves on the score board. With an increase in momentum, West Norfolk started dominating the scrums and competing in rucks which made Lakenham work hard for their final try and conversion of the match from Lucy. But West Norfolk were not finished yet, with a last-minute burst of energy, West scored a further 2 tries consecutively with one conversion, and the game finished with a score of 33-17 to Lakenham Hewett.
Share via
FacebookTwitter
https://www.pitchero.com/clubs
Recent news