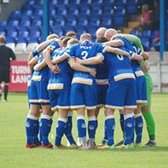 City look towards future with search for young talent

Showcase event to give players the opportunity to shine

Lancaster City will be hosting a special event this May to give players the opportunity to earn a place in Mark Fell’s plans for next season, and also get themselves noticed by full time clubs within the game.
A ‘showcase’ weekend will give players the chance to undertake a rigorous training and development day on Saturday 8th May at the Giant Axe stadium, with the players who impress most being invited back on Sunday 9th May for a trial game which will be viewed by professional club scouts, agents and management teams from up and down the pyramid.
The Saturday session will include training with UEFA A coaching staff from the club and will incorporate some small, informative workshops from experienced ex-pro players, sports scientists, fitness coaches and educators – giving the players a day to promote further thought regarding their future careers in the game.
Lancaster City Manager Mark Fell says this is a great opportunity, “it’s undoubtably an uncertain time for young players in the pro game, we know there is a massive dropout at u16, u18 and u23 age groups, we want to make sure they know their options fully and can get some advice from people in the game who have been down their path.” He added, “We’re here to be realistic with them, many wont yet be at the standard of Step 3, but there will be some gems around and we want to give them a platform, either to come in with us and make an impact with a view to going back into the pro game, or to make the step straight back into full time by standing out at this event. We also want to keep people in the game, if there is a player not yet ready to go back full time, or with us in the Northern Premier division we will support people by referring them further down the pyramid to an appropriate level.”
The Northern Premier league has a rich history of seeing young players make the step up to, or back into, full time football with the likes of Jamie Vardy and Craig Dawson amongst the players who graduated to the Premier League, the Dolly Blues also have strong tradition of developing these players, players with Football League appearances such as Joe Bunney, Jordan Connerton, Alex Kenyon, Aiden Stone, Anthony Pilkington, Jack Armer, Lewis Earl and Ryan Rydel all wore a City shirt in competitive action on their journey to professional football.
The Saturday session will be capped at 40 players with 22 returning for the showcase game on the Sunday. Interested players can apply for this free event by sending the following information to LCFCshowcase@gmail.com
Name / DOB / Address / Position / Phone Number / Email / Details of Agent if applicable / CV and list of clubs.
*A football CV must accompany your application and this opportunity is aimed at players recently released from professional clubs at u18 and u23 age groups, represented England Colleges or other College representative squads or players who have excelled at step 5 and above in the non-league pyramid with a view to playing at step 3 or higher.
Share via
FacebookTwitter
https://www.pitchero.com/clubs
Recent news