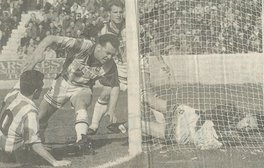 Photo: Lancashire scores a late winner in a crucial promotion clash between Chester and Preston

Everyone at Giant Axe knows Graham "Lanky" Lancashire as the trusted assistant manager on Mark Fell's staff, a calm touchline presence with a wealth of pedigree knowledge accumulated over a professional career which saw him play for a number of the north west's historic footballing institutions.

However, Lancashire's most prolific spell came for this weekend's FA Trophy opponents, Chester FC (then known as Chester City). Starting his career at Burnley, Lancashire recorded some impressive numbers from limited opportunities before taking full advantage of a loan opportunity to conclude the 1993-94 season at the League Two (then known as Football League Division Three) side. The rest is history.

"At the time I was just desperate to play first-team football because I'd been at Burnley from when I was 16, and I had a good year pro but after that, I never really got anywhere near the first-team so I needed to play games," he said.

Lancashire made 11 appearances after joining and helped Chester to promotion by scoring seven goals in that period.

"The opportunity to go to Chester came up and I knew they were doing fairly well in the league that season. I went there with a clean slate and just did my best. It was a great three months I had there which culminated in getting promotion which was fantastic. It was all good from the moment I joined and luckily I was able to contribute to that a little bit.

I've only been back a couple of times since with clubs like Rochdale, so I've not been there for a long, long time so it'll be good to see the place although I don't think it's changed very much since I was there. But it's a great stadium and the pitch was always fantastic."

His brilliant stint at the Deva Stadium included a brace in a 3-2 win over promotion rivals Preston North End, with Lancashire scoring a dramatic late winner on 88 minutes. It's no surprise his sentiment about the club is so positive, an attitude which extends into his assessment of the cup clash tomorrow.

"Obviously since the draw was made we've been really excited about it. You either want a team below you or a big team above you and it's come around that we've got a decent tie out of it. There should be a couple of thousand there and the lads are looking forward to it and we've had some good training sessions this week.

Training last night was especially good, the lads are in a really buoyant mood, confidence is high and we've got a couple of good wins under our belt recently. We've had lads coming back from injury as well so it's all good in the squad at the moment."

With a final word, Lancashire assessed the potential look of tomorrow's game.

"We've got our game plan, but listening to Calum McIntyre this week it looks like they're going to go for it as well, so hopefully it's going to be a good, entertaining cup tie. We're looking forward to it, hopefully we can give a good account of ourselves and then you never know what could happen."