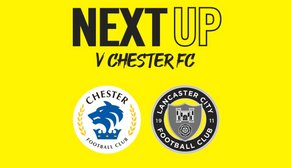 It's City's third away fixture on the spin as they travel to the England/Wales border to face National League North side Chester FC in the FA Trophy.

Tickets
The fans will be separated tomorrow, with Lancaster fans allocated the South Stand (Turnstile 8).

Tickets can be bought online at this link:
https://chesterfc.ktckts.com/event/ctr2223fat2/chester-vs-lancaster-city-isuzu-fa-trophy-2nd-round

Chester FC
Chester are 6th in the National League North, just inside the play-offs. They were 21st after five matches, but the extension of an unbeaten run in the league which now spans eight games has propelled them up the table.

They have been knocked out of both their other cup competitions this season, though, suffering defeat in a penalty shoot-out on both occasions. Oldham Athletic knocked them out in the FA Cup, while Runcorn Linnets of the Northern Premier League Division One West knocked them out of the Cheshire Senior Cup on Tuesday.

This is their first FA Trophy game this season, last season they were knocked out immediately by Curzon Ashton, beaten 2-1. They have not won the competition before.

They will be relying on striker Kurt Willoughby who has eight goals for them in the league this season. He signed from York in the summer, whom he helped to promotion last season.

Lancaster City
City capped a fantastic week with a win in the last minute against Whitby last Saturday, and the waterlogged pitch which postponed the Challenge Cup fixture against Bamber Bridge means the team have had more rest than expected, although did not give Mark Fell his opportunity to shuffle the pack.

Lancaster have been goal-hungry of recent weeks, scoring nine goals in their last four games, Nic Evangelinos, Dale Whitham and Sam Bailey all bagging two each while Brad Carroll, Christian Sloan, and David Norris have one apiece.

In the FA Trophy, ten goals have gone in across the Dollies' two ties so far, both games ending 3-2.

Head-to-Head
Here are City's three most recent clashes with Chester: