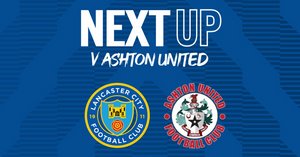 Lancaster City return to Giant Axe to host Ashton United for the first time since the beginning of the month after winning all three away league games in between.

Tickets
Adults: £10
Concessions/OAPs/Students: £7
Juniors (14-17): £5
Under 14s: FREE (if accompanied by an adult)
Armed Forces: FREE (on production of warrant card) except cup games

Concessions include: season ticket holders of other clubs in the top four divisions (on production of their season ticket) except cup games

You can also listen to Craig Thompson's match commentary live at https://dollybluesound.mixlr.com

Ashton United
Though unsuccessful in their recent pursuit of Manchester City striker Erling Haaland, Ashton United certainly carry plenty of threat. The Robins spent the season's opening weeks near the top of the table, peaking in two separate weeks in second place.

Their momentum was halted by a run of one win in seven games, and the deduction of three points sustained for fielding an ineligible player. The top half is congested, and Ashton would currently be in second place if not for that setback.

They have shared the goals around this season – their top scorer is Callum Saunders with six league goals, though he hasn’t found the back of the net in the Northern Premier League since September. They also recently lost forward Darius Osei who was recalled to his parent club, South Shields, after scoring five goals in seven appearances.

Lancaster City
Lancaster are on their best run of form this season. Having not recorded consecutive wins once in the first few months of the season, they have won three back-to-back, all on the road.

A windy encounter with Marske, a dogfight with Whitby and a clash with high-flying Hyde all ended with Lancaster on top. Calen Gallagher-Allison unfortunately suffered a dislocation which will keep him out of action for the foreseeable future. Brad Hubbold also departed the club this week, Enock Likoy has joined Avro FC on a dual registration, while Henri Ogunby has joined Ramsbottom on a temporary loan.

City will be looking to remedy their home form where league wins have been hard to come by. Only one of the league games at Giant Axe has yielded three points for The Dollies.

Head-to-Head
Results against Ashton United have been up and down in recent years. Last season's encounters saw Lancaster win a thriller at Giant Axe before a scrappy game was decided in Ashton’s favour at Hurst Cross.