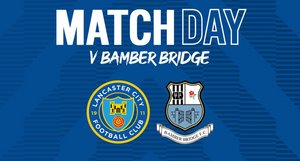 If you can't make it, listen to Craig Thompson's match commentary, live on https://dollybluesound.mixlr.com

Bamber Bridge
Looking at Bamber Bridge's form by numbers, five wins, and five losses from their last 10 games, shows a team with one of the most mixed records in the division. Those five defeats came in six games and featured 7-0 and 5-0 beatings by Hyde United and South Shields respectively. However, they beat Matlock Town 5-1 on the weekend.

Their away record has hurt them this season as they have only won four away from home and have suffered heavy defeats including a 6-1 defeat by Macclesfield in the FA Trophy.

Both sides received a bye for the first round of the Lancashire FA Challenge Trophy so this is Brig's first game in the competition since they were beaten 2-0 by Chorley in the Second Round last season.

They have won the competition once previously, in the 1994-95 season.

Lancaster City
Lancaster got to the semi-final stage of the competition last season before Southport knocked City out, missing a penalty before converting two second-half corners to overturn a 1-0 deficit.

The Dollies have won the competition seven times, the last win coming in 2021 after the final had been postponed because of Covid-19.

Head-to-Head
Recent results between the two have been relatively evenly matched and generally high-scoring, though City haven't beaten Brig since 2017. The last meeting was City's final home game of the 2021-22 season and ended in a 1-0 defeat.