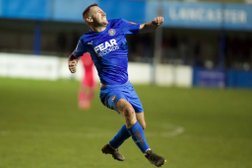 As the floodlights glared, the wind and rain picked up and the chances began to mount, there was an ominous sense that the game was rising towards a polarising conclusion. Ashton United had fought and Lancaster City had fought, both hard in the typically gruelling conditions that beset all non-league grounds at this time of year.

Brad Carroll’s late winner was a contentious one, a goal line incident obscured from the view of all bar Carroll, Ashton’s defenders and supposedly the linesman who made the decision. Carroll's shot disappeared behind a collection of bodies and the action froze as every eye darted to the assistant, whose horizontal flag sent Giant Axe into raptures.

Ashton arrived already weakened, their squad effectively decimated by illness, their bench only able to provide a supplement of three players. They had their chances and had denied Lancaster many – the late loss of points was a cutting blow. They had been forced into emergency transfer action, bringing in goalkeeper Callum Jakovlevs in on loan from Charnock Richard. He distinguished himself with a stubborn display.

For Lancaster, Lamine Toure, on loan from Bolton Wanderers, entered straight into the starting 11 after coming in to shore up a defence weakened by the injury to Calen Gallagher-Allison. He made a similarly impressive response to the elements at play.

Despite their pre-match troubles, Ashton started the brighter and were able to fire the first warning shot of the game in Lancaster’s direction, The Robins’ Jack Kenny alert on the shoulder of the backline as Sam Bailey under hit a flicked backpass into the forward’s path and forced Sam Waller into a smart save he had little time to contemplate.

It was an opening period certainly controlled by Ashton. Their best chance had ironically been assisted by Lancaster boots, but they were often close to finding a breakthrough by their own hand. Robins’ top scorer Callum Saunders nearly met Cole Lonsdale’s deep cross but found himself too far underneath it. They were as near to a goal as you can be without testing the goalkeeper.

For better or worse, Lancaster were relying on sporadic moments of scintillating quality – they needed precision to the millimetre in attack as the Ashton defence stuck tightly to their assignments. Evangelinos nearly changed the momentum when he knocked Sam Bailey’s immaculately measured diagonal ball perfectly into his stride with cushioned chest control, but Ashton’s Sam Baird matched him with a muddy slide tackle that cut a groove in the pitch.

There was nothing they could do to counter the fleet-footed striker a few moments later as he bewitched his pursuers with a textbook Cruyff turn, but defeated himself with a finish over the Neil Marshall Legend Stand.

The loanee Jakovlevs nearly gave City an easier route to goal with some indecisive glovework underneath a high ball, batting it down to the feet of Dale Whitham whose snapshot half-volley lodged itself into the mass of defensive bodies covering the goal line.

It had been a messy but entertaining half, but both sides looked to have set up in deeper encampments in the second, leaving their forward lines on halfway as the only indication of attacking intent. Direct play negated the bobbly pitch but meant neither side had a foothold in the centre, something Mark Fell looked to change with the introduction of Carroll for Whitham on the hour mark. Carroll grew decisively into the game, pulling the strings calmly from a chaotic centre.

It also took a spontaneous chance, a moment of action, to return the sides to the pace they upheld in the first period. Ashton’s Kenny slipped behind Patrick Allington and secured a long ball with nice control, speeding clear before Toure came across on the cover and cleaned the striker out with a crunching tackle.

That spark ignited the rest of the team and they capitalised, applying a dangerous spell of pressure. Finally, they had men in the box, full-backs high and Cowperthwaite collecting clearances on the edge, a cycle of chance creation. Dom Lawson and David Norris loosed half-volleys below and above the crossbar, Jakovlevs equal to the effort on target.

It was a different game now, suddenly alive and not just in front of Ashton’s goal. Sam Waller was not to be outdone by his opposite number and had to leap backwards to claw George Milner’s goalbound cross away from his back post.

The action was rising along with the noise, boosted by the boisterous 'Dollies in the Community' mascots, and the game rose to its dramatic conclusion. Carroll was unmarked in the centre – he fired maybe twice, but the ball was hidden by the bodies gravitating towards it, and only the players around the goal will know whether it crossed the line.

Both sides will come to opposite conclusions but it gave Lancaster the win, at least after they saw out added time with relative comfort. It’s four on the bounce for Mark Fell’s men, a sequence that has shot them into 13th place and provided a reason to start looking upwards.