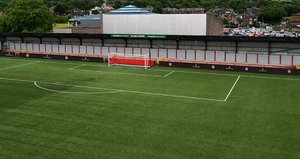 By James Wilson
5 days ago
Share via
FacebookTwitter
https://www.pitchero.com/clubs

Another fantastic away win, 2-1 at high-flying Hyde United, was somewhat overshadowed by a long stoppage in the second half as Calen Gallagher-Allison suffered a serious injury on the hour mark. An ankle dislocation, which was replaced on the field by Lancaster City physio Paul Winstanley and Hyde United physio Lucy Graves, followed by another warm-up period for the players, contributed to a mammoth period of injury time, 24 minutes to be exact.

It was an uncomfortable period for Lancaster’s rearguard to negotiate, as they battled to hang onto a one-goal lead (a familiar situation of recent weeks), their two-goal cushion established by Dom Lawson and Nic Evangelinos having been cut down at the start of the second half by Hyde’s top scorer Jack Redshaw.

Mark Fell made two changes to the side that narrowly lost in the FA Trophy, Christian Sloan coming back into midfield for Brad Carroll, and Dom Lawson returning to the front two in place of David Norris, who was later introduced from the substitutes bench.

Despite travelling to an opponent with such a good record in the league this season and having suffered a demoralising defeat on the weekend, Lancaster came into the first half the hungrier of the two teams and really imprinted their mark on the patterns of the game.

A high-tempo start gave way to an early breakthrough as Lawson put Lancaster ahead in the 13th minute, seeing Whitham's initial headed attempt saved by Tigers’ keeper Dan Atherton before taking full advantage of the rebound. It was the striker's first goal since late September.

Not far behind was Evangelinos, who doubled Lancaster’s lead with his third in six games, a stunning effort from the edge of the box, volleyed home off Sam Bailey’s low centre, further reward for an in-form player whose goalscoring exploits have made the difference in a growing number of games this season.

It gave City a deserved advantage heading into the break, laying the groundwork for a third consecutive away league win. However, the hosts threw a spanner into the works early in the second half as Jack Redshaw got on the end of a recycled corner to halve the deficit, making it 2-1, giving Lancaster well over half an hour to hold on or extend.

It was then that the game suffered two major disruptions. First, Hyde’s defender Callum Spooner received a red card just minutes after Redshaw’s goal for a foul on Niall Cowperthwaite which raised the temperature in the stands. The home fans were baying, and the referee gave a string of decisions against Hyde which only drew more anger from the Project Solar Stadium.

But the noise was suddenly vanquished by that injury to Gallagher-Allison, the concern of the players and staff indicating the seriousness of the incident. The young defender was applauded off on a stretcher, leaving a strange atmosphere in place as Hyde continued in their search for an equaliser through nearly half an hour of added time.

Brad Carsley replaced Gallagher-Allison, but all the action began to gravitate to the other end where Hyde had a shout for a penalty and called Sam Waller into action with an acrobatic punch. The Lancaster defence held in place and saw out a massive win, again in trying circumstances.

It has taken City up into 16th place, three points clear of the relegation zone. Thoughts now turn to the visit of Ashton United on Saturday, and the welfare of Calen Gallagher-Allison, whom the club naturally wishes a speedy recovery.