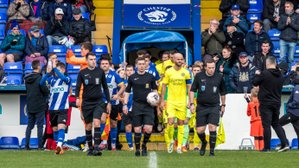 For 70 minutes, the upset looked not just possible, but probable. Thanks to Sam Bailey's wondergoal, Lancaster had worked their way into a position of dominance. Yes, Chester had the bigger share of possession, but the City defence was holding firm and they looked dangerous on the counter.

There had been nothing for Sam Waller to really worry about, while Harry Tyrer had been very busy at the other end and saw two attempts hit his crossbar. He'd also smothered Brad Carroll in front of his goal, and kept his side in the game long enough for them to change it. It wasn't really their team, but one man that did so, Kurt Willoughby converting two one-on-ones, the second in injury time, to end Lancaster's run in the FA Trophy ruthlessly.

There had been a real buzz around the squad and support who were packed into a corner of the south stand, and two buoyant wins last week had set a positive tone coming into this much-anticipated fixture. Chester, at the top end of the National League North, were well matched owing to Lancaster's seamless mentality, and perhaps they were even surprised by the ferocity with which they were pressured for large parts by the visitors.

Lancaster’s regular 5-3-2 was laid out in a more compact version than normal, Carroll (in for Christian Sloan as the only change this week) stuck close to Niall Cowperthwaite in defensive midfield, a screening shield in front of the defence which kept an aggressive line.

There were risks associated, Chester showed that when they forced Lancaster deeper and deeper with a side-to-side spell of possession which opened up gaps while it helped Lancaster’s clockwork press which benefitted from moments of slackness in Chester’s possession.

Chester controlled the early stages for little reward, but Mark Fell intervened before the hosts simple possession became anything more dangerous. A brief stoppage in which David Norris received treatment gave him a chance to reorganise the team, and he reshuffled the midfield, dropping Norris and Dale Whitham between Carroll and Cowperthwaite to solidify the centre. It took immediate effect, completely ending Chester’s occupation of Lancaster space.

Sam Bailey’s wondergoal was mindblowing in nature, a hard goal for the eyes to believe. At every stage it looked improbable. Whitham’s deep cross had to have the depth and accuracy to find the only free body in the box, Kyle Brownhill, at the end of his run to the back post. Brownhill had to spring, crane his neck around the ball and hook it to the back post, where Bailey had to lunge into the air, stretch his foot above his head and crash the ball beyond Tyrer.

But if Team X begins to control the game, creates y number of chances and has z bodies in the box waiting for the next cross, what is the result? It is nearly always a goal. That was the basic equation that produced Bailey’s, only with a few footballing embellishments. Figures exploded out of the Lancaster dugout and every player bar Waller sprinted to join Bailey in front of Chester’s most dense section of support.

Lancaster nearly doubled their lead on the stroke of half time when Whitham headed Bailey's cross against the bar. It was the only question mark over the performance since the tactical switch; missed chances have a knack for biting City. Carroll squandered a better one after the break when he burst onto Cowperthwaite’s through ball, whisked it past the last defender but was snuffed by the spread frame of Tyrer.

Chester were losing their early composure and their own attacks were starting to expose them to Lancaster’s. Bailey and Evangelinos were particularly in tune on the break, setting up long chases down the right before support arrived on the left. Brownhill was the man on their most dangerous iteration, striking Bailey’s through ball first time. It deflected off a diving defender and rose above the committed Tyrer, struck the bar and came down on the line, giving the keeper time to recover.

As it turned out, it was the peak of an incredible performance, and the last attack before Chester levelled it out of the blue.

It was long one ball that squirmed through the right channel of defence and, unfortunately for Lancaster, Willoughby was the man on the ball. He didn’t flinch before rolling the ball past Waller. The Deva Stadium roared into voice and returned the determination to the home side who launched revolving attacks into the City area.

City did not submit, but they could not change the fate of the game as Willoughby took advantage of an identical situation in added time, beating Waller with the ball at his feet this time before passing it into an empty net. Thanks to their striker, Chester had escaped. He had taken his chances.