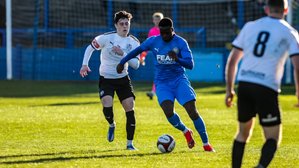 Recent weeks and four fine wins in a row have drawn Lancaster closer to the top table, the domain of Marine AFC who arrived boasting the stingiest defence in the division. It was, however, the visitors’ attackers that won them this game, 3-1 the final score, as Sol Solomon proved too hard to contain, scoring a brace either side of half-time and winning a penalty.

The nimble forward opened the scoring for the visitors after six minutes, and Marine controlled the first half before Lancaster and Jamie Mellen were hit with a red card and concession of a second goal at the start of the second which, though it galvanised them to halve the deficit shortly after, ultimately led them on the road to a 3-1 loss.

The game was broken into a frustrating succession of fouls in its latter stages, by no means a spectacle, but the 13 cards awarded gave the impression of a dirty, dangerous game, which it hardly was.

Marine made a striking impression on Giant Axe, cooly working themselves into the ascendancy with the customary displays of effort taken to force Lancaster backwards omitted. They were soon rewarded with the opener. Lucas Weir rose to head Jack Lussey’s cross on goal and Sam Waller responded with a typically acrobatic save, but the ball looped off his palm towards goal, struck the post and was bundled in by Solomon on the rebound.

Lancaster have fallen behind only once recently, against Whitby, a frantic game, and Marine needed to be unsettled too. While Lancaster established a period of possession in forward areas to relieve the pressure, a half-chance for David Norris, smothered by keeper Bailey Passant, was all they had to show.

Marine saw out their defensive engagements and returned to the offensive. The visitors had impressed down the middle but were most effective out wide. Lancaster were having trouble finding Solomon at the back post who was again left unattended and was only denied a brace by the combination of Dale Whitham’s block and Sam Waller’s save. Then, Mo Touray appeared at the near post, breaking free of his man but finding Waller the obstacle. It was a war on two fronts, two posts for City.

The rearguard was valiant, lifesaving, but only valuable in that sense. Brief handbags between Brad Carroll and Charley Doyle, for which they were both booked, came too late to ignite a fire, concluding the first half.

Andrew Teague replaced Pat Allington at the break. The change seemed right, nothing to do with Allington, just the arrival of impetus, energy and aggression. But irony abounds, and no sooner had Lancaster steeled themselves for the second half, they were deprived of Mellen by the card-happy official. Mellen, booked just previously, had snapped into a hard tackle on the edge of the box, but the referee gave him his second yellow and marching orders.

Lancaster had seen out a draw after a long period with 10 men against FC United of Manchester, but Marine were in a ruthless mood and looked to have put the game to bed when Solomon added his second from the corner quadrant, looping the dead ball over Waller’s head.

3-0 is usually a death sentence with a full complement of players and 2-0 should be with a man down, but the sting of conceding a second renewed Lancaster’s drive, catalysing a calm, forward move that swept wide to the feet of Kyle Brownhill. He found the incoming Whitham, who continued his knack of opportune arrival to tap the low centre home, stunning the leaders.

There were 30 scratchy minutes left and the card tally hit double figures. The football was broken into fractions by fouls, yellows and physio appearances. Marine had the opportunity to end the contest when Lamine Toure went to ground and allegedly fouled Solomon, though everyone on that side of the pitch attests that the defender won the ball fairly.

The forward could not bag his hat-trick from the spot though, sending a powerful penalty over the bar. An injury time period of seven minutes gave Lancaster encouragement but Marine scented blood as City piled forwards, hitting the bar on the counter before substitute Connor Evans sealed a 3-1 win for the away side at the end.