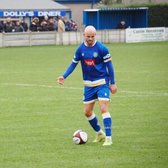 You asked, he answered!

Would you have hoped to make a full-time career in football?

It’s every boy’s dream, isn’t it? I’ve been fortunate enough to play professionally however some things aren’t meant to be.

That’s like asking who’s better Messi or Ronaldo? I’ll tell you this when one plays on the left and one plays on the right I have never seen so many diags. I have to tell them to stop passing to each other and pass it inside. Two of the nicest lads you’ll ever meet, life and soul of the club. I can’t choose.
How do you get your head so shiny?

I used to get a few of the young lads to shine it before a game. Fenners and Jack Armer. Hopefully, Jack signs again so he can keep on top of it.

What’s your favourite goal you’ve scored in your career?

Lowestoft away playing for Barrow in the last game of the season. Won the league that day too. Lost half of my Barnet on Lowestoft pitch. Unbelievable day.
Apart from being a semi-professional footballer and caring for children, what do you like to do in your downtime?

It takes up all of my time to be honest. I like going to the gym and I play a lot of golf in the summer.

What have you made of the support from city fans, both home and away during your time at the club?

The fans have been class since I’ve been here especially away from home. Scarborough away being the highlight. They are very supportive however I’m still waiting for a Cowperthwaite song.

What do you think has been your best performance in a city shirt so far?

A couple spring to mind however I’d say Witton away. I was like a man possessed.
What’s been your favourite city game so far?

South Shields away. Tough place to go and to come away with 3 points was a big achievement for the lads.

What are your personal goals for next season but also for city as a team as well?

We have to look at what we achieved last year and push for promotion again. We have a great team sport and a good core of local lads. With a couple of additions, we can be up there again no doubt.

Do you shave your head before or after the game?

Before a game. Always good to have an aerodynamic advantage over the opposition.