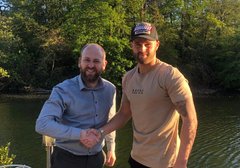 Lancaster City have further strengthened their squad for the 2019/20 season with the addition of Niall Cowperthwaite.

Niall is a class act, he’s proven to be able to play successfully at a higher level, he’s fit and ready for a new challenge.
Mark Fell

The 27 year old midfielder arrives with an excellent pedigree having won the National League North with Barrow, his career began with Morecambe before a switch to Barrow and then a prolonged absence from the game through an ACL injury.

Known for his adaptability, the Grange based, 6ft 2 son of former Barrow striker Colin Cowperthwaite has penned a one year deal with the Dolly Blues and manager Mark Fell says he is looking forward to working with his latest recruit,

“Niall is a class act, he’s proven to be able to play successfully at a higher level, he’s fit and ready for a new challenge. We’ve kept tabs on him for a while now, there was nearly a deal done a few months ago to get him last season but it didn’t work out, so we’ve had to be patient but now is the right time for him to come into this squad and he’ll make us stronger. There’s the added benefit of his versatility, I’ve seen him play at right back and left back and he can fill in at centre half, but ultimately we want him to be working in the engine room of midfield.”

Speaking to the club official website, Niall says the decision to join the Dollies was a straightforward one, “I’ve had a few enquiries over the summer but this was the standout club for me. Having spoken to Mark on a number of occasions I was really impressed by his ideas and vision for the club, that’s something I want to be a part of. After a long absence through injury I’m now fully fit and firing. I’m looking forward to pre-season and meeting up with the lads and helping the team challenge towards the top of the table, which I know we are more than capable of doing.”

Meanwhile the City manager says that the vast majority of the current crop of players have already verbally committed to the Dollies for next season and he remains in the market for two more new faces, “we’ve pretty much sorted everyone now,” he said, “there is no point announcing non-contract players until 1st July when they are registered, effectively until then they are still on the market. There will be a couple that will move on, or already have but the core of the side remains and I’ve just the last couple of deals to re-negotiate. In terms of new signings we clearly need a goalkeeper and that’s in hand, we’d also like to bring in another defender if we can get the right player”

The gaffer went onto confirm that Charlie Russell had left the club and Ryan Winder is expected to make his loan move to Northwich Victoria at permanent one. Steve Williams has retired from the game and Jack Sims has returned to his parent club Blackpool.