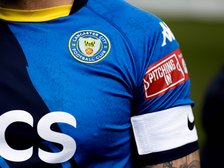 Three players extend with further information to come next month

Lancaster City are pleased to provide the following update on squad preparations ahead of the 2022/23 season:

In line with contractual options, the club have retained Andrew Teague, Niall Cowperthwaite and Liam Brockbank by taking out the extension options in their agreements.

According to our press release on Friday, Simon Wills' contract has not been extended after a mutual agreement between the player and the club.

Re-engagement with non-contracted players has been undertaken, but announcements on non-contract players will be held until league registration forms are issued and can be submitted, which is usually at the end of June.

The players return to pre-season training on Thursday 25th July 2022 and full details on our pre-season schedule are due imminent release.