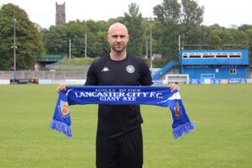 Lancaster City FC are excited to announce that defender Andrew Teague has returned to the club.

With multiple non-league titles under his belt, Teague is a serial winner and returns to the club that he served in his early playing days.

Sold to Chorley 10 years ago, the Preston based, central defender went into play 390 games at Victory Park and becomes the first summer signing for the Dollies.
Mark Fell says Teague was a key summer recruitment target, “we probably didn’t have the defensive depth we needed last season and despite having the most clean sheets in the league, I felt we needed at least 1, probably 2 more defenders in. Teaguey has all the attributes we look for, he’s got a great attitude, great defensive qualities and is an outstanding leader. It’s been very straightforward, he wanted to play for Lancaster and we wanted him here.”

– Social media coverage when your player is directly mentioned (e.g. goal or man of the match). A great reach with over 11,000 twitter followers and 4000 on Facebook.

– 2 tickets to a home league game of choice, including a picture with your chosen player on the Giant Axe turf

– All player sponsors are entered into a prize draw at the end of the season for a signed home shirt (1st prize), signed away shirt (2nd Prize) and free sponsorship renewal (3rd Prize)

A cost-effective way to get yours, or your business’s name in lights this coming season, plus a great tax-deductible method of sponsoring the club in the Northern Premier League.