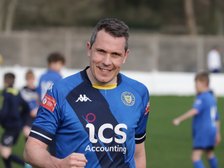 Thank you and farewell Glenn Steel

By LCFC Media
4 days ago
Share via
FacebookTwitter
https://www.pitchero.com/clubs

Lancaster City can announce the departure of Glenn Steel who leaves to take up a Player Assistant Manager role at Colne FC working under former City boss Phil Brown.

Glenn is a true Dolly Blue legend having played over 200 games for the club with distinction. He is a powerful and dominating central defender who was occasionally used in central midfield certainly at the start of Mark Fell’s reign, even popping up with the odd stint in goal!

His career took him from Fylde to Bamber Bridge and onto Giant Axe in 2017. Mark Fell said the old warhorse was one of his most consistent performers: "Glenn has been excellent for this club, an ultimate professional in the way he conducted himself, trained and played. Glenn wasn’t just a top player for Lancaster for a long period of time, he was also on many occasions during games the referee, linesman, and pantomime villain, we’ll certainly miss him but wish him well with his next chapter. He goes with our best wishes and will always be welcome at the Giant Axe.”

Glenn also spoke to the official Lancaster City FC website, adding “It was an extremely tough decision to make but I’ve decided to leave Lancaster City in order to pursue a new challenge next season. The club, the management, the committee and the fans have all been fantastic to me over my two spells and I was very proud to make my 200th appearance towards the end of this last season. I’ve made some lifelong friends here and for this reason alone, I’m certain you’ll see me at Giant Axe in the future. All the best for the season ahead.”

Good luck Glenn and thank you for your service to the club.