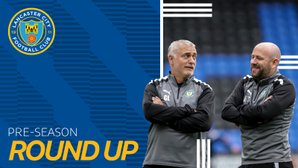 A rundown of all the fixtures, the new contracts, arrivals and departures across the summer

Though pre-season often stands as a byword for new beginnings, fresh starts and positive mindsets, the expectations of rejuvenation often expose the reality of stagnation and the dread of unpreparedness. At Lancaster City this summer, that feared scenario could not be further from the case. Just a couple of weeks after finishing the season at Mickleover, the gears behind the scenes began to click.

New deals with Puma, Fear Records and Career Wallet whet the appetite for the barrage of signings and new contracts that have been announced with regularity across the course of the summer. Brad Carroll, a member of the Northern Premier League West Division ‘Team of the Season’, was unveiled as the first fresh face of the new campaign, and they have been rolling through the door since. In addition to Mark Fell’s eight signings, City have tied down a number of key players to new contracts, keeping a steady core within an evolving team. Andy Teague, Niall Cowperthwaite and Sam Bailey to name but a few will anchor the recent recruits in the no-nonsense, team ethic of the club.

On the pitch, City have met with an eclectic mix of opponents, ranging from club academies to hardened non-league outfits, with the first ‘Local XI’ fixture also making its welcome way into the pre-season calendar. Win or loss, each challenge has enlightened the thinking of the players and staff in tackling the upcoming hurdles of the Northern Premier League season which is so nearly upon us.

Without further ado, here is your round-up of a memorable pre-season at Lancaster City.

After finishing last season on the road, The Dollies started this one in the same way with trips down the M6 to Skelmersdale, and up the Morecambe Road to face Slyne-with-Hest. City first played out a thriller against Skelmersdale, winning 3-2 thanks to a brace from the trialist number nine, who later came to be known to us all as Dom Lawson after his exploits in pre-season encouraged Mark Fell to sign him from Thornton Cleveleys. He was on the scoresheet a few days later as City trounced Slyne-with-Hest 6-2, alongside Joel Davidson and Charlie Bailey in the first half, before new boys Brad Carroll, and Nico Evangelinos with two, put the game well beyond doubt.

They completed the trio of victories with a late 2-1 victory over Blackburn Rovers u23s as football returned to Giant Axe. Following in the footsteps of City’s other goal-hungry signings. Jake Connelly opened the scoring just after the break to bring the feelgood factor back to the Axe. It was soon cancelled out by an equaliser, but with five minutes of normal time remaining, a Blackburn own goal restored the advantage.

After such a strong start, Lancaster were scrutinised by more canny opposition. Southport, recent foes from the LFA semi-final in March, snatched a win in similarly narrow fashion as a tight game was settled at the death by the conversion of a Southport penalty. The negative momentum, it seemed, was catching as City found themselves on the wrong side of two 3-0 defeats in succession, losing to AFC Fylde and then local side Garstang, leaving Fell with plenty more to consider after six games of pre-season than after three. Curtis Anderson was also put out of action with a facial injury, leading to the short-term loan signing of the returning Jordan Eastham.
Since then, City have returned to form and recaptured lost energy to lead perfectly into the season proper. An emphatic 6-1 win against a valiant Local XI was one of the highlights of the summer, bringing the community together through football. A Giant Axe favourite, David Norris, also returned to don the Dolly Blue shirt and celebrated the occasion with an emphatic brace, in addition to goals from two trialists and Enock Likoy.

After indulging in goals and community spirit, the club was on the road for the final time in pre-season, travelling to Widnes where they achieved the first of two highly encouraging victories to lead into the league campaign. After a goalless first half. Nico Evangelinos assumed the mantle of super-sub, converting a penalty and ruthlessly capitalising on a late error in the Widnes ranks to boost his credentials as the club’s number nine.

And his focused mood continued into the immediacy of the next game as Preston North End’s u23s were put to his sword just a minute into proceedings. The goal, scored as he doggedly pressed the keeper, is the fruit of one of Fell’s most recognisable philosophies and represents the buy-in of the new recruits into his methods. Jake Connelly doubled the lead on the stroke of half-time, though City were pegged back after the break. Dom Lawson grabbed his fourth of pre-season with essentially the final kick of the game, though an injury to Christian Sloan marred the excitement for the win.

New arrivals, nine in total, have been steadily arriving from mid-May to late June. The sum of this list is a comprehensive total, a group of players who bolster the footballing pedigree and fill in the weak points of the side. In Evangelinos and Connelly, City have two aggressive attackers who can upset the stability of opposing back lines, while Lawson is a predatory striker, outfoxing centre-backs with clever movement. Brads Carroll and Hubbold are strong midfielders, able to perform a variety of disciplines across the centre of the park, and the addition of Whitham from National League Curzon Ashton is a serious statement of internet and manifestation of control on the pitch. Jamie Mellen and Calen Gallagher-Allison are youthful recruits, providing depth to an experienced defence while also challenging the established occupants of their positions. City then welcomed back Paul Jarvis, returning for a third spell at his hometown club. A versatile operator, he is comfortable on the wing, in midfield and at fullback, providing City with a wealth of possibilities.

Lancaster said goodbye to a handful of long-serving fan favourites, including defenders Ben Hudson and Glenn Steel who were always selfless in defence and committed to putting their bodies on the line. Steel even had a memorable turn in goal in Lancaster’s 2-1 win against Radcliffe in February. Rob Wilson and Simon Wills were also exceptionally reliable presences in the heart of midfield, with Wills racking up over three hundred appearances for the Dolly Blues and serving as a key member of the leadership contingent at the club. In comparison, Liam Brockbank’s solitary season at Giant Axe is a much shorter era, but in winning the Media’s Player of the Season, he proved how respected he was in the side. Every departing player was a valued member of the squad and left on good terms, but their exits have simultaneously ushered in the start of a new era.

Starting from the back, everyone at the club was delighted to hear news of Curtis Anderson’s re-signing. The World Cup-winning shot-stopper made a huge impact upon his arrival at the club, tightening the defence and giving The Dollies a platform to push on in the second half of the season. Ahead of him, Sam Bailey and Andy Teague’s renewals were important in retaining the unique dynamic in the City defence. Teague’s game-changing leadership abilities and commitment were made obvious by the unbeaten run The Dollies went on after he returned from injury, while Bailey provided a deep attacking threat, challenging the opposition with crosses and long throws. The leadership contingent was completed when Niall Cowperthwaite resigned, committing to another year of energetic midfield work and affecting the game in both boxes. Charlie Bailey and Enock Likoy re-signed to provide punch and creativity in attack, with Bailey looking to capitalise on a productive 2021/22 season, and Likoy seeking to knock ‘em in for another year.

You're going to have to keep your eyes glued to the website and socials for this one - later in the week we'll have a more comprehensive account of the players in our City squad you won't be able to gaze away from this season!