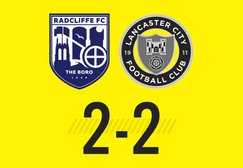 Lancaster secured a point, a dramatic point, in the late stages. They had played poorly for 70 minutes, to the tune of a 2-0 deficit, and had cause to lament a wasted evening. The only thing they were lamenting on 90 minutes, aside from two more defensive injuries, was that the electric winger Jake Connelly had barely been available for the first half of the season.

Brought on when all seemed lost, Connelly inspired the troops with a blistering cameo that raised the level of his team and saw him contribute a goal, with a second ruled out.

Radcliffe’s recent winless league run had ended in their last game, and their almost even goal difference and mid-table league position suggested an inconsistent season. They were very good in the first half, managing the Lancaster attacks without exertion, but they were stunned by the arrival of Connelly.

Lancaster could not crack the granite façade of the home defence for much of the game. It held an uncompromising line, repelled the through balls and looked, simply, like a unit that would not concede. Their rockiness was not gradually eroded, but split by an iron punch.

The tightening of the relegation battle made points more imperative. In the Northern Premier League, the final destiny often fails to emerge until it is sealed. All you can do is keep accumulating points. Lancaster ground a fourth consecutive one here, from nothing.

A bombastic pre-match playlist, which had spent an hour and a half blaring above Radcliffe’s unconventionally placed media area (behind the goal), concluded only seconds before the opening whistle, giving way to a gentle clamour that removed the illusion we were anywhere other than North Manchester on a foggy Tuesday night.

The home side attacked towards us, perhaps a trick of perspective that lent their early salvos a greater sense of intensity, though their first-minute foray forward would have looked dangerous from any angle. Jake Thompson burst into open space on his left flank, and could have taken it closer towards the unprotected Sam Waller but it was Luca Navarro’s fault, the recipient of Thompson’s square ball, that Radcliffe did not take an instant lead; he skewed a first-time strike towards the corner flag.

Another tiresome first-half substitution interrupted the game, the injured Jamie Mellen off for Paul Jarvis, but it couldn’t sufficiently break the momentum of Radcliffe’s mounting pressure. Lancaster defenders were concentrated in their final actions and kept the final dagger at bay for a little while, but a little while only

A second corner in succession curled away from the near post and the desire of Michael Brewster saw him break away from the City pack, though his hooked finish into the top corner did the majority of the work. The initial surprise that Brewster had scored such a stylish goal dissipated, then Radcliffe just carried on.

Tempers flared in the second period as Jude Oyibo picked up the first booking of the night for lunging at Christian Sloan, with Andrew Teague slamming into a retributive tackle. The skipper’s night ended shortly after as he was substituted cradling his arm, replaced by Brad Carsley in a change of shape. It was a brief aside to the continuing story of Radcliffe dominance, and they doubled their advantage with the same certainty that they had founded it. Navarro was the scorer, putting away a rebound unassumingly.

Graham Lancashire threw Jake Connelly, whose debut season has been culled by injury, on in an apparent last throw of the dice. Suddenly, Lancaster were menacing and purposeful, Connelly popping up on the right and in the centre, dribbling between both, making defenders miss. A burst down the right and on goal was the warning, his shot parried by Stewart, but minutes later he was on the edge of the box, coldly collecting, setting out, firing low. Goal! Pick the ball up, bring it to the centre.

Go again. Connelly on the ball, shifting – no one getting near him. Dangerous shot blocked. The pressure was reversed as if fed backwards through a time machine. Carsley too was energised, muscling in. Lancaster had a corner, cleared but Charlie Bailey was on it, setting up and crossing. It squirmed through a pair of legs to the feet of Carsley, players watching like supporters. Carsley levelled it up from point-blank range.

10 minutes to go, Carsley burst in on goal, Radcliffe bewildered. The defence scrambled and caught up to him, but he shifted away from them. Surely not? Stewart flung out a leg like Emiliano Martinez to deny him.

Radcliffe seethed at the events and looked to retake the lead, but so did Lancaster. Dom Lawson arrived down the left, dragging a shot wide – but Connelly was arriving at the back post. He put it home. There were milliseconds of delirium before the linesman deemed the winger offside. A point, though, rescued.