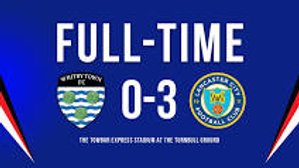 City trekked over the Pennines keen to avenge their season opening 1-0 defeat.

With Whitby Town sitting comfortably above them in the league it looked no easy task, but City quickly put their passing game together and dominated from start to finish.

Chances came thick and fast for the visitors. Liam Brockbank – marauding at will down the left flank – had already dribbled twice into the box and been denied, before curling in a ball from the left touchline which the keeper couldn’t keep out, to open the scoring on 15th minutes. Charlie Bailey was personally prolifically profligate. He had umpteen chances, created himself or through pinpoint passing, which were either saved or put narrowly wide. On forty minutes, Charlie turned provider and pulled the ball back perfectly for Nathan Reid to strike strong and straight, only for the embattled Shane Bland in the Whitby goal to make a spectacular save low to his right. There was still time for Whitby’s stopper to bat away Sam Bailey’s stinging shot before half-time saw City go in unbelievably only one goal to the good

Would The Dolly Blues rue not taking a plethora of chances ?
No. Three minutes into the second half Nathan Reid threaded a ball through to Charlie Bailey who coolly drew the goalkeeper and finally slotted the ball home to make it 2-0.
City continued to dominate the match all over the pitch. Defensively they were hardly troubled. City’s newest No.1, Liam Stanway, does look to be a real find. Although a spectator for long periods, Liam made a crucial one on one save in the first half to snuffle Whitby’s only real chance. Midfield never stopped working, pressing and passing, attack after attack.
At 3-0, after Nathan Reid had drawn a foul tackle from behind in the area and Rob Wilson had despatched the penalty with his usual aplomb in the 71st minute, City kept right on going for more. Substitute new boy Cian McDermitt dribbled through three players before unleashing a shot to the top corner only for the keeper to fling himself across to palm it away. From the resultant corner Andy Teague fired a clear chance over the bar. As late as the 89th minute Liam Brockbank burst through to bring out yet another superb one handed save from the Whitby keeper.
This was a thoroughly deserved, resounding result for Lancaster City. On this performance they look set for a real run up the table.
After the match manager Mark Fell beamed : "“best we’ve been this season”, the gaffer was full of praise for his side after a 3-0 away win at Whitby."