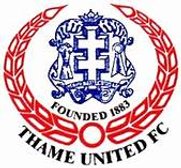 After Saturday's goalless draw, we now travel to Thame for a replay on Tuesday evening, ko 7.45pm. If scores are level after 90 minutes the game will go to ET, and then, if necessary, penalties. If we win, we will face local rivals Bristol Manor Farm in the First Qualifying Round at home on 27th October.

****
Our last remaining cup competition, the Buildbase FA Trophy, starts tomorrow with a visit from fellow Southern League club Thame United. The Larks have never played Thame before as far as we can ascertain, and their current form suggests this will be a tight match.

For the last two seasons we have got to the first qualifying round of the Trophy, on both occasions going out to higher-level opponents, so we are hoping to at least equal that achievement this season.

Squad news: club captain Mike Baker continues his rehabilitation and may or may not feature, as will Geraint Bater. Both Wayne Nderemani and Rory Huntbach are available again having missed Wednesday's Somerset Premier Cup tie, so Phil and Arnie have some tough decisions to make. We are hoping that striker Lewis Powell, currently the division's top scorer, will make it 10 goals in 10 games!

Tomorrow is also Non-League Day, which we are proud to support. The match kicks off at 3pm and we hope to see you there.