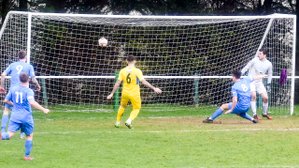 The Larks defied the form book to pull off an emphatic win against high-flying Somerset rivals Taunton Town.

In the face of a blustery wind the home side got on the front foot early doors when they forced Taunton to concede three corners in as many minutes. Taunton were reduced to the occasional break, the first of which prompted a brave dive by our keeper Shaun Semmens at Ollie Chamberlain’s feet when he was through on goal. The majority of the first half was an entertaining battle for supremacy in which the Larks came off best, especially when Peacocks' defender Owen Irish saw red for a dangerous challenge.

The Larks really upped the ante at the start of the second half with two quick-fire goals within minutes, both from midfielder Joe Raynes, which came so early in the half that they were missed by most supporters. Joe's first goal was scored within seconds of the restart, a neat strike off a corner from close range, and the second was a superb half-volley on the spin from a Josh Egan cross.

Taunton fought back with a shot that pinged off the bar, and Shaun earned his man of the match award with a handful of superlative saves in the middle of the second period. However, the win was sealed when Larks debutant Alex Lambert set Greg Peel up to grab his first Larks' goal with a strike in the box on the 83rd minute. Indeed, the Larks had a couple of good chances to make it 4-0 when Josh's long-range shot missed the Taunton goal by inches, and then Ben Brooks hit the post.