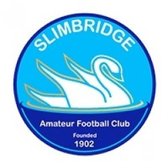 The Larks put 10 man Slimbridge to the sword at Thornhill Park on a bright but very windy day.

The visitors had the advantage of the wind in the first half and did not hesitate to make it count, going ahead after less than a minute when centre forward Greg Peel struck home in the box after a superb effort from man of the match Joe Raynes sailed across the face of the goal.

Emboldened by their early lead the Larks continued to attack: Tom Knighton forced a corner with a good run down the left wing and then with great skill Raynesy picked up a nice ball from Greg for Joe Tumelty, whose shot was blocked by the Swans' keeper Marcus Beauchamp. The wind nearly blew a Jamie Lyons cross into the net before the Larks doubled their lead with a fine strike from Raynesy, assisted by Joe Tumelty. Joe (Raynes) then nearly made it 3 with a rocket of a strike from the edge of the box.

It was pretty much one way traffic at the midpoint of the half as the wind and the Larks' dominance kept the ball in the home half. Slimbridge did break and their number 11 Marley Thomas launched an effort goalwards, but it flew wide. The Larks soon reasserted themselves and won a penalty when Josh Egan was brought down just inside the box. Lyno stepped up and coolly sent the keeper the wrong way.

At 3-0 down after less than half an hour things took a turn for the worse for the home side when Ryan Thwaite received a second yellow and was sent off. The Larks then had to make their own substitution when Ed Dryden went off injured to be replaced by Dan Restorick. The first half ended with a curling shot from Greg that only just went wide.

We knew that the second half would be more of a challenge playing with the wind against us, and the Swans grabbed a consolation goal just three minutes after the restart when Brad Martin headed home in the box. Shortly afterwards, Shaun Semmens pulled off a fine save to stop a second Swans goal, which would have changed the game completely, and the Larks regained their momentum.

With some 20 minutes to go sub Alex Lambert went on a superb solo run only to be levelled in the penalty area. Lyno dispatched his second spot kick with aplomb and we were back in scoring mode as only a few moments later Joe Tumelty made it 5-1 when he picked up on a fine ball from Lyno, drew Beauchamp out of the Swans goal and calmly finished beyond him. Joe and Greg both had excellent chances to increase the Swans' misery in the final stages of the game but the target eluded them.

The Slimbridge match report is here. Photo gallery by Liz Guy is here.