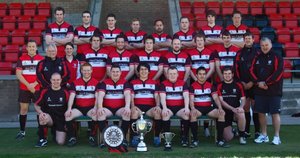 Too many penalties give the game away

This fixture revived a rivalry from earlier in the decade with several closely fought encounters with Lasswade being marginally ahead. This occasion continued that tradition and it was repeat offending by the visitors that made the difference in the end.

Lasswade were soon on top and had points on the board within three minutes after their set scrum forced a penalty by the opposition. Smith slotted the three points.

Lasswade continued to dominate up front ensuring the majority of possession but the Greenock back line looked the more threatening on the few opportunities it was given.

Twenty five minutes into the first half, the Lasswade pack forced two five metre scrum penalties making it inevitable that the referee would award a penalty try when the Wnderers eight succumbed for a third time.

0-10 looked like being the half time score but in stoppage time the Wanders strung together a period of sustained forward pressure until Gray grounded the ball from a rolling maul and Guthrie converted to make it 7-10.

Early in the second half the Wanderers backs took advantage of a Lasswade error to counter attack from within their own 22. Good support running and interpassing outflanked the visitors’ defence and Smith touched down wide out but still within Guthrie’s range.

Honours were more even through the second half with neither side threatening the other’s line but, unlike Wanderers, Lasswade gave away too many penalties three of which were converted by Guthrie to open up a thirteen point advantage.

With time running out, Gladstone provided some hope when he broke from the base of a ruck on the home 22, spotted a space and sidestepped the full back to ground under the posts for an easy and quick drop goal conversion by Smith.

In part the last couple of minutes was about preserving the loser’s bonus point but even that was finally scotched when a Lasswade tackler failed to roll away and Guthrie was on target to set up the 26-17 final score.

Lasswade will clearly need to show more discipline when they travel to Perth this Saturday to take on winless Perthshire at North Inch. Kick-off 3pm.