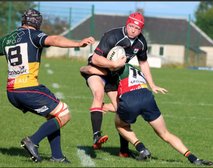 A five try five pointer to keep us among the leaders

Hillhead Jordanhill travelled to Hawthornden with just one win from their opening league game against Murrayfield Wanderers. If they hoped to improve on that record they were to be seriously disappointed. The hosts opened up a three try, 19-3 lead before conceding a penalty try in first half stoppage time. The second half was a lock-out with the bonus point try coming on the hour and the fifth with ten minutes of play left.

With only a couple of changes from last week, Lasswade are enjoying some continuity of personnel this season and it is beginning to show on the field as backs and forwards combine to make ground or defend as required.

Hillhead kicked off in bright sunshine and only a gentle crosswind. Lasswade were immediately on the offensive and with just three minutes gone a break down the right wing was finished off by Humphries in the corner.

Just five minutes later the Lasswade backs took play to within touching distance of the visitors’ line and Robertson collected from the resultant ruck to force his way over and Matt Smith slotted the conversion from wide out.

Some strong individual running but without adequate support, kept Hillhead in contention and as the second quarter approached they were rewarded with a penalty, converted by Keegan when Lasswade fringed at a ruck.

Play and territory was mostly Lasswade’s and just past the half hour a drive up the middle allowed Cook to break for the line and had Thomas at his shoulder for the offload and the last few yards. The increasingly reliable Smith boot added the two points for a lead of 19-3.

With the clock in first half stoppage time a Hills counter attack saw Whyte break down the wing but a high tackle just short of the try line robbed him of the glory but led to a penalty try and yellow card against the hosts.

A score line of 19-10 was anything but secure with forty minutes still to go and play swung between the 22’s until the hour approached and a penalty allowed Lasswade to set up a short range lineout. The inevitable catch and drive was stalled at the line but Greig picked up from the ruck and forced his way over the last few yards and Smith was on target again.

With the hosts firmly in the driving seat now, play was almost exclusively in the Hills’ half of the field. Pressure on the Hills line forced a penalty ten metres out and a quick tap set Mackenzie up for the fifth try with Smith adding what was to be the last score of the game and the final tally of 33-10.
In a concerted effort by backs and forwards Blair Smith stood out and collected Lasswade’s Player of the match award.

This Saturday is an international fixture when Lasswade travel to Berwick-on-Tweed. The two teams’ statistics from the first four matches are virtually identical so a close encounter is in prospect. Kick off 3pm.