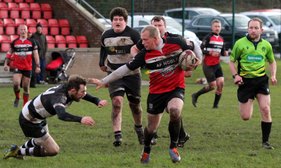 A five pointer and a big boost to our points difference

Although Lasswade has won as many games as the other league leaders they have fallen short on try bonus points and need to rectify this. On paper Perthshire were a prime opportunity being second from bottom with only one win from eleven and Lasswade won the away leg 43-13.

A bonus point try in the first half seemed unlikely when the hosts kicked off towards Rosewell against a stiff, icy wind on a pitch close to saturated. Undeterred, though, they immediately put pressure on the Perthshire line until penalised and kicked back into their own half.

They were soon back on the offensive. From a scrum in their own 22, forwards and backs combined to get the ball back up the pitch and Matt Smith jinked and swerved round three defenders to cover the last 20 metres to the corner with just 8 minutes elapsed. Not surprisingly the headwind deflected his conversion attempt.

On the quarter-hour Wichary opened his ultimately successful claim to player of the match when he capitalised on a scrum turnover on the Perthshire 22 and Smith added the two.

Lasswade dominated territory and possession for the next 20 minutes but Perthshire spoiled and defended well enough to staunch the flow of points. They eventually creaked again as a largely forward drive up the centre was finished off by Robertson under the posts for an easy two points by Smith.

The restart went dead and from the scrum on halfway Blair Smith broke through some weak tackling and set up Gladstone to cover the last 20 metres to the post for 26-0.

Into first half stoppage time Blair Smith added his own name to the score sheet after Wichary made the initial break. Smith’s boot made up the 33-0 half-time score.

With the wind at their backs and totally on top in just about every aspect of the game, Lasswade used the second forty to add five more tries through Nisbet, a second for Wichary, Mackenzie, Graham and Scott Sinclair plus 3 Smith conversions.

Matt Hart’s efforts and contribution earned him a share of the player of the match award.

This five pointer and the considerable addition to their points difference, moves Lasswade up to third place, just five points behind Berwick and Ardrossan, the latter having played an extra game. It’s still at least a five horse race though with just 9 points between first and fifth.

Seasonal festivities mean that Laswade’s next fixture is on 11 January away to sixth placed Hillhead/Jordanhill. Kick-off 2pm.