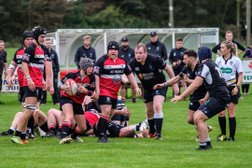 A tremendous bonus point away win against close contenders.

In the latter stages of a very tight promotion race with five teams still in contention, all matches are important. With Lasswade in second place and Ardrossan in fourth, this tie was all the more crucial for Lasswade. Win it and they increase their grip on second place. Lose it and they drop two or three places.

Lasswade fielded a close to first choice team for this encounter with no novices or debutants.

As forecast the rain started just before kick-off and continued steadily at least until no side and ensuring the pitch was soft and somewhat treacherous. With the wind blowing straight across the park it was unlikely to be of much assistance to either side.

Ardrossan kicked off and the first scrum inside the Lasswade 22 they showed a dominance that was to continue throughout the half and forced a penalty which their standoff duly slotted.

Lasswade’s response from the restart was to camp in the home 22 for the next ten minutes until Robertson forced his way over beside the posts making for an easy Matt Smith conversion and 3-7.

The next 10 minutes was between the 22’s until Ardrossan earned a 5m scrum and used their heavier pack to drive over for Lamont to touch down for a seven pointer and 10-7.

The set scrum may have been struggling but everywhere else Lasswade had the edge but had to settle on a Smith penalty conversion to level up the scores at 10-10 for half time.

The second period restart set Lasswade up in the home 22 and a series of controlled rucks and recycling set Robertson up for his second try of the game under the posts for an almost guaranteed Smith conversion with barely 3 minutes gone.

The exchanges remained pretty even for the next 20 minutes so when a deliberate knock-on penalty opportunity arrived just into the final quarter Smith duly obliged to extend the lead to 10-20.

With the Accies visibly tiring and losing heart, Lasswade stepped up the pressure in the last 15 minutes. Their third try was a rather bizarre affair when there was a major melee in the right corner close to the home line from which the ball squirted out across the park and Burns had the relatively simple and unopposed task of scooping it up and dotting it down under the posts for Smith to make it 10-27.

With 5 minutes remaining the hunt was on for the bonus point try and the icing on the cake. Sure enough, as the clock clicked into overtime, Matt Smith took a tight side pass from a 5 metre scrum to drive over in the corner and take his personal tally to 17 points and the final score of 10-32.

This was another powerful display by all of the Lasswade squad but not for the first time their player of the match award went to Matt Hart whose elusiveness and mobility make up for the fact that he is not the biggest of wing forwards.

This win increases Lasswade’s grip on second place with Berwick 8 points ahead and Greenock Wanderers 3 points behind but with both teams having played an extra game.

The Six Nations takes control this weekend and the League contest returns with a full fixture card on March 21, Lasswade welcome Carrick to Hawthornden. Kick-off 3pm.