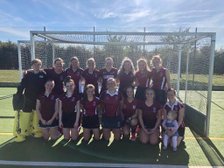 Following on from a disappointing draw against Stratford the previous week Leamington 3’s were keen to ensure they took away 3 points today. From the first whistle there was plenty of enthusiasm and energy on the Leamington side. The initial 10-15 minutes consisted of Sutton pressing the Leamington side well and finding opportunistic breaks. Play seemed to change from Leamington to Sutton with each side intercepting balls well. Particular mention to Lucia Monzani for her quick reactions in the centre of the pitch. Shortly after Nat Carrol made a run into the attacking D and a short was awarded. This was deflected by Milly Hemmings into the right hand corner of the goal! The Leamington side were up by 1-0.

The Sutton side not to be outdone fought back straight away and applied pressure to Leamington defence. With Sutton’s 131 being quick on the break she found ways through the midfield into Leamington’s 25 and some near miss strikes at the D were made.

Into half time the game could really go either way as Sutton were very dangerous on the attack. With a stern team talk from captain Elysia Macwhinnie the second half saw Leamington take advantage. Following on from a quickly taken long corner fed in by Erica Wright to Debbie Burton Milly Hemmings found the goal again with a little deflection into the goal.

With 2 goals up Leamington began to find their stride. Polly Powling making some fantastic tackles and then driving forward on the right with some punishingly powerful hits into the attacking D kept Sutton on the back foot. For some time Leamington seemed to be building up to surely another goal, but Sutton were playing well defensively. Eventually Esther Taylor found a way through what seemed an eternal wall of Sutton players and the score line was increased to 3-0.

In the last 6 minutes Sutton were looking for a last minute consultation goal, but the defence of Jessica Johnson, Jo McLean, Elysia Macwhinnie, Kristy McMullan and guest appearance (!) of Liz Solman at right back proved to be rock solid. A further attack into our attacking D found Amy Cooper-Tutton score her first goal of the season.

The end score line was a convincing 4-0 win. # This is our time to shine..
Player of the match to Milly Hemmings and Jo McLean. Dick of the day to Kirsty McMullan for her endless hours of googling. Remind us- what is the definition of a ‘Natrick’?!?