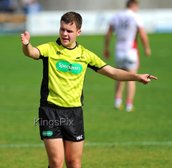 The 2015 RFL Gradings have been released today (Thursday 15th January) with the news that two Leeds RLRS officials have been promoted to Grade 1 referee status.

Tom Grant and Jonathan Roberts are the referees that have been given Grade 1 status and will officiate in the Kingstone Press Championship Leagues this coming season.

Leeds RLRS officials who have been graded are