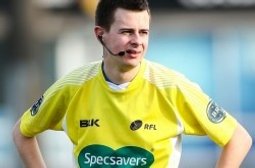 The RFL is delighted to announce that referee Joe Cobb has been appointed as a full-time match official.

Cobb, who has been officiating in the Kingstone Press Championship for the past few years, made his debut as a First Utility Super League referee last season in the London Broncos v Wigan Warriors game.

He has taken charge of a handful of Super League matches in 2015, including at Magic Weekend when he officiated in the Castleford Tigers v Wakefield Trinity Wildcats fixture and the Super League Round 17 derby, Wakefield v Leeds Rhinos.

The 28-year-old, who started refereeing as a teenager, is pleased to make it to the pinnacle of officiating.

“I’m absolutely delighted to become a full-time match official,” he said. “I’ve been working hard for a long time and it’s great to reach such a high level of refereeing.

“I’ve had quite a lot of experience in terms of refereeing in the Championship and being touch-judge at some international games so that should put me in good stead and make me better going forward.”

Cobb was a match official during the 2013 Rugby League World Cup, and touch-judged the quarter-final tie between Samoa and Fiji.

As well as running the line for the 2013 and 2014 Challenge Cup finals at Wembley Stadium, he refereed the 2014 Kingstone Press Championship One Grand Final between Oldham and Hunslet Hawks.

RFL Match Officials Director Jon Sharp spoke highly of Cobb’s progress and of the delight that the RFL’s cadet programme has delivered its first full-time official.

“It’s a fantastic chance for Joe,” he said. “He’s still got to do some improving but him stepping up to be full-time is a credit to the hard work that he’s put in.

“It’s a massive thumbs up to the development system to see Joe make the step up. He’s been part of the cadets system for the past 18 months and he’s the first to come through there as a full-time match official.

“Joe’s experience that he’s gained on the big stages already will help him with the step up into officiating in Super League regularly.

“He’s put in some good performances in the Championship and I’m delighted to see him make more progress.

“The cadet programme is delivering increasing number of high quality young match officials and demonstrates that there is a clearly-defined career pathway for anyone interested in becoming a referee or touch-judge.”