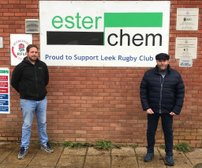 Leek RUFC is kickstarting its return to post-lockdown rugby with a new coach at the helm.
The club has appointed Leek-based Joel Booth as Head Coach, overseeing all senior and Colts squads at Estherchem Park.

Booth’s association with the club spans decades, having joined as a junior and risen through the ranks to play at 1st XV level, before moving to Yorkshire and furthering his playing career with Harrogate.
On returning to live in Staffordshire he played at top-flight regional level with Longton RUFC, before coming back to his home club in XXXX (year) and resuming his 1st XV playing career.

He will be supported by an impressive coaching line-up of:
• highly-experienced Chris Mudd, who has coached at senior level for many years
• former 1st XV head coach Luke Grainger, who will also oversee development of the Colts squad
• 1st XV player Sam Hunt supporting senior and Colts players
• guest coaches including club stalwarts Gary McDermott and Rob McDermott.

Chair of Senior Rugby, Tony Hine said: “These are exciting times for the club. Leek has great ambition and Joel’s impressive playing and coaching credentials are exactly what we need to put us in a competitive position when the new season starts.
“Joel is a Leek player through and through and is highly respected by all the teams. He is a great role-model for what can be achieved and brings a wealth of fresh ideas, expertise and enthusiasm to the pitch.
“We are lucky to have such a knowledgeable group of coaches and we believe their leadership can be a game-changer as we prepare to challenge for success in the Midlands North West 2 League.”

New Head Coach Joel Booth said: “Returning to the club of my youth has been a brilliant experience. I am looking forward to developing all our players and helping them achieve their full potential at 1st XV, 2nd XV and Colts levels.
“This club has a proud history of nurturing great rugby talent and it is vital that we give our young players a pathway to achieve their sporting ambitions and from junior to 1st XV level.”

The appointment follows Lee Pickles’ decision to take the post of Director of Rugby at Congleton RUFC after five years coaching at Leek.

Tony Hine added: “Lee has been a fantastic coach for Leek and we wish him every success in his new role.
“Now, as sport continues to open up, we look forward to welcoming our many supporters back to the club and hope to show them quality game play at Esterchem Park.”