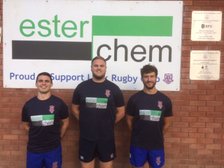 Last Saturday Leek entertained Ilkeston RUFC in the 2nd round of the RFU intermediate cup at a blustery Esterchem Park.

This was the cup competition that Leek reached the Twickenham final in May 2014. Again due to injuries and unavailibilities Leek had a changed team starting with Adam Smith , Ed Cheadle and Joe Newton Taylor in the front row with the Barlow and Hardern at second row and the back row of Booth, Williams and starting debutant ,Kidd . This week the back line started with Needham at scrum half with Floyd and Palmer in the centres with wingers Varley and Bully alongside man of the match Will Graham playing at full back . The subs bench had Bobby Cheadle , Jack Newton Taylor and Tom Fairhurst.

Leek started with the strong wind against them and for the first 10 minutes the game was evenly matched as both sides tried to deal with the conditions , however on 11 minutes Ilkeston moved the ball along the back line to score a nice try under the posts for the conversation to be taken and take a 0-7 lead .Leek immediately replied after they started to come out on top in the scrum . After several scrums on the Ilkeston 5 metre line Leek were awarded a penalty try to take the score to 7-7 .For the next 20 mins Leek had control of the game but were unable to turn the control and pressure into points through various individual errors and on 35 mins conceded a penalty on their 22 which Ilkeston scored to take a 7-10 lead . Leek had the opportunity to reply but lost a couple of lineouts and went in at half time down 7-10 .
From the kick off with the wind to Leeks advantage they started to take some control and on 45 mins a quick tap penalty from Needham to centre Bully allowed him to score in the corner to take a 12-10 lead . The difficult conversion was taken by Hunt to move the score to 14-10 . At this stage it seemed Leek would begin to score far more points through the scrum dominance , however they were unable to turn the pressure into a greater points tally after some good defense from the opposition.

On 65 mins a kick from the half way line by full back Graham , who had had a strong catching and running game all afternoon provided a beneficial bounce to the Leek player who sprinted to the try line to touch down in front of the Ilkeston player to take the 5 points with an easy conversion by Hunt, it allowed Leek to take a 21-10 lead. Leek again seemed to dominate with some positive work from debutants Varley and Kidd but were unable to take the score further . In the last 20 mins Leeks subs bench were all involved with Tom Fairhurst having an opportunity to step into the 1st team match environment . Leek finished the game as winners at 21-10 and move into the next round and importantly no injuries but allowing the other squad members to be involved at this level , Leek 2nd team also came out winners with a loss for the 3rd team. This coming Saturday the 1st team travel to Wolverhampton in another tough league game with a 3pm KO .”