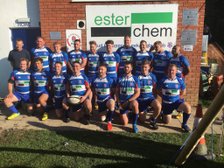 Sometimes in the early rounds of this competition players don't make themselves available for one reason or another….

….and Casuals suffered this fate on their travels to Esterchem Park on Saturday where they came up against a determined Leek outfit intent on putting the record straight following the defeat in the opening league game last Saturday against Stafford.

Leek fielded a few changes themselves with Jack Newton Taylor, Dan Sharratt and Kini Buli lining up as the back 3. With Tom Scragg a late cry off, it allowed Leek's most promising youngster, Will Midwinter to get his first start for the 1st team at centre partnering Adam Varley, another player who was unavailable last week. Sam Hunt everted to 10 with Dan Needham at scum half. Bobby Cheadle, Ed Cheadle and Lewis Dunleavy were in an unchanged front row but Luke Hardern was partnered at lock with Joel Booth as several locks were unavailable. It meant George Hunt started at No.8 with Reece Milner at open side and Tom Fairhurst at blindside.
Billy Kidd, Adam Smith and Ollie Drew completed the bench.

On a another glorious afternoon, Leek swept into a 20 - 0 lead with 38 minutes gone after tries from Will Midwinter, Reece Milner and Ed Cheadle, a conversion and a penalty from Sam Hunt as the Moorlanders dominated possession, territory and the scrum. Then a loose ball allowed Casuals back into the game as the half closed down when the flanker picked the ball up and ran in from near half way. The conversion was good and with the kick off to come before half time, it was 20-7. The kick off had Casuals retaining possession until Reece Milner made a turn over and quick hands left allowed Jack Newton Taylor to sprint down the wing to score the 4th Leek try. The conversion missed and half time came with Leek holding a good lead at 25-7.
The 2nd half opened with Casuals needing to score first if they were to get back into the game and this, to their credit, they did with only 3 minutes played. A penalty allowed the kick for the lineout in Leek's 22 and a good drive saw the forwards crash over for the try which remained unconverted. 25-12.
Leek then turned on the power and pace scoring 8 further tries at regular intervals as the visitors tired and lost players to injury forcing positional change as well.
Will Midwinter scored his 2nd and then Reece Milner likewise. This was followed by tries from Jack Newton Taylor's 2nd,Ollie Drew, Jack Newton Taylor's 3rd, George Hunt, and 2 from Dan Sharratt. Sam Hunt converted 7 of the tries to bring Leek's total to 79 points before Casuals scored the last points with a deserved try from the prop, duly converted to end the scoring at 79-19.
Tom Fairhurst had been outstanding in the 1st half on the flank for Leek and he is becoming an invaluable part of the squad and he is to be congratulated on his dedication to improving his game. Reece Milner is coming back to fitness as is Dan Sharratt and with line and scrum working well, it should make for an interesting selection meeting this week.

Stafford and Newcastle also won in this round on Saturday and they, along with Leek, will be in the 3rd round draw - last 16 - with matches to be played on Saturday October 12th.

It's back to the league this Saturday with a tough away fixture at Tamworth. They had an opening day win at Crewe and will be looking to win the league this year after finishing 2nd last year and losing out on promotion only by losing the playoff game. Kick-off is at 3pm at Wiggington Park.
Leek's next home league fixture is on Saturday October 5th when Walsall visit Esterchem Park.
Author John McDermott