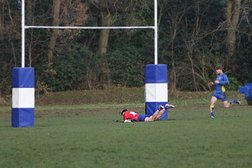 An enthralling match between two sides with virtually the same league records produced the tight game and result expected….

….with Leek getting in front with 13 minutes to play to edge their Derbyshire visitors.

Jack Newton Taylor was at full back with Kini Buli and Dan Sharratt on the wings. Sam Hunt moved to centre with James Floyd. Isaac Reaney and Ollie Drew were at half back.
Lewis Dunleavy, Ed Cheadle and Bobby Cheadle were in the front row with Joel Booth joined by Jake Bainbridge at lock following Luke Hardern's injury last week. George Hunt, Reece Milner and Billie Kidd were in the back row.
With the injuries and unavailability from last week, it meant a first start on the bench this season for DJ Allen and Matt Tanner with Matt Churchill completing the line-up.

The referee was delayed and so the match kicked off late with the flood lights on and Leek playing in red against the blue of Matlock on a cold, crisp afternoon at Esterchem Park.
The first scrum saw Leek pushed off their own ball and it was to be a feature of the game with the big Matlock front row causing trouble all game for the smaller Leek pack. However, Leek had the first chance at points on 4 minutes after Matlock backs were caught offside at the lineout but Sam Hunt's attempt just missed. Then 3 minutes later Sam Hunt had another chance and this time he was successful with the penalty after Matlock went off feet at the ruck. 3-0.
On 20 minutes, Matlock were on the attack and only a forward pass prevented a try. All Matlock penalties were being opted for lineouts instead of points attempt but Leek's disruptive defence at the line kept the visitors at bay until Leek were penalised under their own posts for not releasing and the visitors drew level with the successful penalty on 25 minutes. 3-3.
5 minutes later and the Matlock lock charged through the line on the crash ball and could not be stopped after good work by the visitors. The conversion was good and Matlock deservedly led 3-10.
With the last play of the half in added time, Leek were pressing in the Matlock 22 and won a penalty for slow release. Sam Hunt kicked well to keep the Moorlanders in touch at 6-10 at the break.

The 2nd half started badly for Leek after the forwards won the scrum but then lost the ball as the Matlock back row hounded Ollie Drew. Quick passes right found the winger and he sprinted in for a great try. The conversion was missed but Matlock extended the lead to 6-15 on 43 minutes.
3 minutes later, Jack Newton Taylor made a break from a clearance kick and set up the forwards to ruck well in the Matlock half. Leek then won a penalty for not releasing again and Sam Hunt nudged the score to 9-15 on 46 minutes.
Matlock picked up the pace again and extended their lead with their 3rd try on 51 minutes. The lineout win after the penalty on the Matlock left led to a series of pick ups and rucks which eventually led to a crash over try. The conversion was good and Matlock were up to 9-22 and looking good for their lead.
Back came Leek though as winger Matt Churchill scored in the right corner after the kick off. The Matlock clearance went straight to touch and from the lineout on the Matlock 22, Leek produced some great continuity before George Hunt made the break to the 5 metre line. The defence was scrambling but couldn't prevent the overlap as Matt Churchill dived over on 53 minutes. Sam Hunt's magnificent conversion added the extras and that would prove crucial in the final analysis. 16-22.

Matlock were still looking for the next score and won a couple of penalties deep in Leek's 22 on the right. Opting to scrum this time, Leek managed to disrupt the colossus on 74 minutes and maybe finally the Leek forwards were getting on top. Their own scrum was secured and Ollie Drew kicked a high ball clear down the left touch. The miss field on Leek's 10 metre line, gave Leek another scrum on the left. The referee indicated 10 minutes to play at this point as Leek won their scrum and the backs set off left to right and finally had Jack Newton Taylor in some space. He jinked past a couple of defenders and then back inside to outsprint the full back and scored a fantastic try under the posts. (See attached photo of Jack under the posts). Sam Hunt converted and Leek led 23-22 with 8 minutes to go.
Leek had the better of the possession and territory in the final minutes with Hunt just missing another penalty attempt on the last play and as the whistle blew for full time, there was an excited reaction from the home support as they realised their team had won an epic battle against a very good side.

The win sets up a Midlands Cup semi final to be played on January 18th.
In the other 3 ties today, Malvern beat Northampton Old Scouts, Newark beat Stafford and Leighton Buzzard won at Old Laurentian.
Author John McDermott
It means there is one club represented from each of the 4 Midland leagues in the semi-finals and we should know the draw in the next few days.

Meanwhile, Wolverhampton played their game in hand in the league and won at Crewe by 3-39 to open up a 5 point lead on Camp Hill and 6 point lead over Leek and Stafford in 3rd and 4th. In the league's other match Newcastle beat Tamworth 22-18.
This Saturday, Leek plays at home again in the league against Moseley Oak. Kick-off is at 2.15pm.
Please note it is Past Players Day at the club. All players who played for Leek are welcome for a pre match buffet. The game is sponsored by Brian Mellor Financial Services.