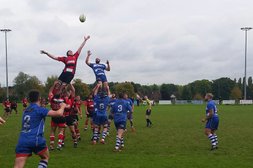 Leek held on in the 2nd half to record their first ever league win against Staffordshire rivals Walsall at Delves Rd on Saturday.

Sam Horton started at full back with Dan Sharratt and Ollie Drew on the wings. Nick Palmer and James Floyd were in the centre and Dan Needham and Gary McDermott were at half back.
With Adam Kelly injured, Jason Milner started in the front row with Ed Cheadle and skipper, Bobby Cheadle. Ed Harrison and Phil Tomczak continued at lock. Luke Staton was at No.8 and Andy McFadden was back at blindside with George Hunt on the open side. Andy Thompson, Reece Milner and Dan Cooper were on the bench.

Another perfect autumnal day greeted the players as Walsall started strongly with Leek dropping off tackles and conceding a 4th minute penalty for not moving away from the tackle. The Walsall fullback duly put the hosts in front. 3-0. Then Leek took over the half. Dan Sharratt was stopped 5 metres short after a blind side break after 6 minutes before Gary McDermott kicked an 8th minute penalty for off feet at the ruck. 3-3.

McDermott had a chance to nudge Leek ahead on 13 minutes but his penalty, for not releasing in the ruck on the right hit the post.
On 18 minutes, Leek won a lineout outside Walsall’s 22 on the left. A couple of rucks were set up midfield and then James Floyd sprinted into the 22. His momentum had Walsall’s defence stretched and Ed Harrison then bludgeoned his way through the last 2 defenders to score a try on the left. McDermott converted and Leek led 3-10.

Leek were on top and enjoying all the territory and 5 minutes later they extended their lead after a scrum outside the Walsall 22. McDermott, Palmer and Drew moved the ball into the Walsall 22 where Nick Palmer set up a maul. The pack joined in and mauled all the way over the line for Palmer to score the try. McDermott missed the conversion but at 3-15 Leek were looking to capitalise on all the possession they enjoyed. On 30 minutes, the pack was up to the Walsall 5 metre line and looking to maul over but were adjudged to have formed the maul illegally. Still Leek looked lively and it wasn’t until the 37th minute that Walsall had any real pressure on Leek’s line. A maul was held up 5 metres out and Leek cleared. As the game entered stoppage time Walsall scored a try. They had good retention for the first time in the game and worked the ball wide left and back inside. Reaching the goal line, the Leek defence stopped the drive over but as the ball went wide left, the gap opened and the centre scored. The conversion missed and the half time whistle blew at 8-15.

The 2nd half opened with Leek producing a move down the blind side that had try written all over it as James Floyd had options left and right for the scoring pass. However his pass left to Ollie Drew just had the Walsall wing in the way to disrupt and Walsall cleared.
McDermott missed a penalty on 47 minutes after the scrum collapsed and Walsall started to get back into the game. A 55th minute penalty for not rolling away from the ruck hit the post and went into the dead ball area for Leek to have a 22 drop out. Then Leek’s forwards won a turnover at the ruck on 58 minutes and McDermott made no mistake with this attempt to improve the lead to 8-18.
However, from the kick off, an immediate offside for dropping the ball and a player in front playing the ball had the Walsall full back pegging the 3 points back as he converted. 11-18.

Then Walsall upped their game and suddenly Leek looked vulnerable. A try came on 63 minutes after good work stretched the defence to the right before good hands left saw the wing score a nice try. The conversion was good and the game was tied at 18 all.
Leek’s answer came 5 minutes later when a good lineout off the top on Walsall’s 10 metre line then allowed a ruck to occur over the gain line. Dan Needham collected, spotted a gap and sprinted through to win the leg chase to the line and score a great individual try by the posts. McDermott converted and Leek took back the lead at 18-25.

Back came Walsall and a scrum 10 metres from the Leek line on 72 minutes kept the pressure on Leek and a clever cross field kick to the right bounced awkwardly in front of 2 Leek defenders and over the line to be pounced on by a Walsall centre for a try. The conversion was critical but the post was struck and the ball stayed out. 23-25.
Still, Walsall came back and Leek’s defence was tested near their own line. The pack worked hard not to concede a penalty and a last minute driving maul took them away from their own line to secure the last whistle from the referee and a hard fought win.
It had been a good game and Walsall could well have taken the points as well as Leek but the Moorlanders will be happy to have won their first game ever at Walsall. The win moved Leek to 12th as Silhillians lost at Stratford.
Next week is a free league weekend and Leek ‘s next 1st XV home fixture is against Whitchurch on October 24th. KO 3pm.
Plenty of action at the club this Saturday though with 2 fixtures on offer. The 2nds and 3rds playing at home and the Rugby World Cup quarter finals are live on the big screen.

Photo attached of a Leek lineout v Walsall on Saturday with Luke Staton leaping high and Dan Needham, Leek’s 3rd try scorer and scrum half anticipating to receive the ball.