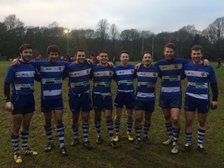 Leek welcomed Camp Hill to EsterChem Park for the opening home fixture of the new year and what a game the sides put on for the spectators.

In a superbly contested match, Leek and Camp Hill scored 4 tries each but Leek’s penalties edged them to an 8 point win and a 7th successive league win.

Sam Hunt started at full back with Dan Sharratt and Tom Scragg on the wings. Rob McDermott was back at 12 partnering George Hunt in the centre.
Gary McDermott and Ollie Drew were at half back.
Skipper Bobby Cheadle, brother Ed and Lee Williams made up the front row. Luke Hardern and Ben Barlow were at lock.
Simon Drew, John Booth and Andy Thompson were in the back row and so Leek started the game with 4 sets of brothers. See attachment. (LtR, Hunts, Cheadles, Drews, McDermotts)
On the bench were Adam Smith, Ed Harrison and Dan Needham.

Despite a late arrival at EsterChem Park, it was Camp Hill who were quickly out of the blocks on this cold, clear day, perfect for rugby.
On 5 minutes, a high tackle around half way led to a superb kick for a lineout by the talented fly half who found touch near Leek’s 5 metre line.
A good catch and drive had the Camps pack crashing over the line for a try. The conversion failed but it was an ominous sign for the Leek forwards and a signal not to give penalties away in their own half.
On 9 minutes, Leek won a penalty for a scrum offence and Joel Booth took a quick tap. The ensuing ruck led to another penalty and Gary McDermott’s attempt hit the post and Camps touched down for a 22 drop out.
Leek were enjoying plenty of possession and on 13 minutes another penalty for in at the side of a ruck had McDermott kicking for the lineout near Camps 5 metre line.
The catch and drive was as equally effective as Camps earlier and hard working Lee Williams crashed over for Leek’s opening try. McDermott missed the conversion and the game was tied at 5 all.

3 minutes later and that new directive about high tackles had referee Phil Jones reaching for the first of 4 yellow cards on the day. This first one was against a Camps back rower.
On 19 minutes, the Leek forwards were driving in the Camps 22 and Camps were penalised again for in at the side of the maul. McDermott kicked for the line on the 5 metre line.
Camps defence stopped the maul and then 2 subsequent rucks near the line but the ball came out left and a couple of passes later skipper Bobby Cheadle touched down for a hard fought try on the left.

McDermott’s conversion was good and Leek led for the first time at 12-5.It was a lead they didn’t relinquish for the rest of the game but next to score was Camp Hill on 27 minutes when Leek collapsed the scrum on their own 10 metre line and the inevitable kick
for the lineout in Leek’s 22 led to a catch and drive. The forwards worked to get the ball to the back of the maul and Leek’s defence had no answer to the powerful maul as the Camps forwards crashed over
for their 2nd try of the game. The conversion missed but at 12-10, no-one was surprised to see this competitive and quality match unfolding on the field.

On 35 minutes, Camp Hill had a lineout on their own 10 metre line. The ball didn’t come back quickly and the fly half adjusted to kick with his left foot enabling
Gary McDermott to get close enough for a charge down. The ball ended up on the Camp Hill try line and McDermott followed up to touch down. He converted his own try to extend Leek’s lead to 19-10.

Leek continued to press and won a penalty in front of the posts for another high tackle and McDermott’s conversion gave Leek a good lead at 22-10 coming into half time.
However, the half ended sourly for Leek as Rob McDermott was yellow carded for a high tackle on half way.

The 2nd half opened with another yellow card. This time it was the Camps fly half with a high tackle and from the lineout following Leek won another penalty for a late tackle.
McDermott’s attempt was good and at 25-10, Camps needed to score three times to overhaul Leek, albeit with only 2 minutes of the 2nd half gone, there was plenty of time for that.

Camps fought back and on 54 minutes won a penalty for a deliberate knock on as they attacked in Leek’s 22. The kick for the lineout came but this time Leek’s defence held
the drive. In doing so though, Luke Hardern was adjudged to have stopped the drive illegally and the referee awarded the visitors a penalty try. The conversion was simple and with Hardern
receiving a yellow card, the next 10 minutes would be crucial for the Moorlanders with the score at 25-17.
From the kick-off, Camps knocked on and with a man collecting the ball in front, a penalty came Leek’s way.
McDermott’s attempt hit the post again and as Ed Cheadle sprinted in to recover the ball under the posts a try seemed probable, but Camps defended well and cleared as Leek offended at the tackle.
On 64 minutes, Camp Hill cleared the ball down field to half way. It allowed Sam Hunt to collect and his pass to wing Tom Scragg had him beyond the first tackler. A superb inside pass to Bobby Cheadle
had the skipper getting to the Camp Hill 22.

He formed the ruck, then the ball sped inside to the backs where another ruck was set up 15 metres from the Camp Hill line. Dan Needham picked up and made a thrust for the line and then Joel Booth
picked up at the base of the next ruck and crashed over for Leek’s 4th try on the right. McDermott’s conversion was good and Leek recovered their 15 point lead on 64 minutes.

Camp Hill knew they had to throw caution to the wind now and their dangerous fly half instigated a series of runs that had Camps up to Leek’s line on 68 minutes, but a knock on meant Leek cleared.
Still on 73 minutes, not to be denied, they won a penalty for not rolling away in the tackle. It allowed for a 5 metre lineout and although Leek’s defence almost held the drive the Camps forwards
did just enough to get the ball carrier to the line for a deserved score. The conversion was good and at 32-24 on 75 minutes, there was still all to play for.
However, Camp Hill couldn’t break Leek down and so the game ended with try bonus’s for both teams and Leek with the vital win.

It had been a great game to watch and the home games at EsterChem Park keep coming with high quality fixtures. The next one is against Walsall on February 11th.

This Saturday Leek travels to Kidderminster for a 2.15 KO.

February 4th is a non league weekend, but it is the start of the 6 Nation Championship.

Scotland and Ireland begin the 2017 tournament in Edinburgh at 2.25pm followed by
England and France at Twickenham at 4.50pm .
Both games will be live on the big screens at the club.
Food and drink available