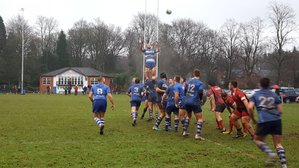 Leek maintained their winning streak after a tremendous game of rugby against country rivals Walsall at EsterChem Park on Saturday.

Sam Hunt was back at full back with Matt Leadingham and Tom Scragg on the wings.
Rob McDermott and George Hunt were in the centres with Gary McDermott and returning Dan Needham at half back.
Ad Smith started in the front row with the Cheadle brothers and Ed Harrison and Ben Barlow were at lock.
Luke Staton was returning also and he made up the back row with Joel Booth and Reece Milner.
Veteran former captain, Jason Milner was on the bench alongside Phil Tomczak and Elliot Anderson.

It was a grey, dank day at EsterChem Park with drizzle on and off most of the 1st half, but the pitch held up well and both sides’ handling was tremendous given those conditions.
The opening quarter was all about field position as both teams kept it tight and neither side risked running the ball from their own 22.

As the 2nd quarter started however, Leek had won a penalty and opted for a lineout in the Walsall 22. A catch and drive had Walsall penalised and from the next lineout, the flanker was yellow carded
for in at the side of the maul as Leek marched towards the goal line.
The 3rd lineout ensued and another maul was halted by strong Walsall defending but another offence on the floor had the referee warning the Walsall skipper about repeated infringements.
The next lineout proved decisive as Leek’s forwards and then some backs joined the maul and Adam Smith crashed over for the opening score near the right corner on 23 minutes.
Gary McDermott’s conversion missed but Leek were first on the score board at 5-0.

4 minutes later and Walsall had responded well. Hands in the ruck with Walsall on the Leek 22 gave a good opportunity for them to hit back and the penalty was duly converted. 5-3.
On 32 minutes, Leek had some great control on the left in the Walsall half and the final break had Gary McDermott to the Walsall 5 metre line. With the referee playing an offside advantage,
Leek looked to spin the ball wide right and an overlap for Tom Scragg had the line begging but a knock on brought play back for the original penalty and McDermott increased Leek’s lead to 8-3.
Then as the first half entered stoppage time, Leek were probing again on the Walsall 22 and a high tackle decision allowed McDermott to complete a hat trick of penalty successes to end the half with Leek holding an 11-3 lead.

The 2nd half saw the introduction of some replacements and both sides started strongly. However on 54 minutes, Walsall gained the momentum and were dangerous in the Leek 22. Leek were caught offside and the successful penalty drew Walsall back to 11-6.
Then followed some tremendous Leek pressure as the forwards assaulted the Walsall line. 3 times the red forwards turned the ball over close to their own line though and eventually the ball was cleared on 65 minutes to half way. However, the run back from Matt Leadingham had Walsall disorganised for a second and from the ruck quick ball, another high tackle offence gave McDermott the chance toedge Leek to 14-6 with 14 minutes to go.

Leek continued to pressure Walsall and the decisive play of the match started in the 72nd minute. A lineout win just in Walsall’s half saw Gary McDermott kick back over the defending right wing’s shoulder.
He tried to parry it back and keep the ball in play but it bounced out for a line to Leek on Walsall’s 22. The line won, the ball sped out. Quick rucks and great handling had Rob McDermott breaking to the Walsall 5 metre line.
Joel Booth took over and got to the line. Then Reece Milner picked up and crashed over for the match winning score.
Gary McDermott converted and at 21-6 on 74 minutes, the visitors needed 3 scores to take the game away from Leek.
The Delves Road outfit gave it a thunderous go and dominated the final 10 minutes of play. On 82 minutes, after incessant pressure produced a couple of penalties and Leek’s defence had performed heroics,
Walsall’s flanker was not to be denied and he sprinted in under the posts after determined work by the whole team. The conversion was quickly taken and at 21-13, the referee signalled last play from the kick-off.

It was about the bonus point now and Walsall again probed superbly retaining the ball and trying to get close enough for a penalty attempt.
4 minutes of ball retention ended in a high tackle against Leek and a long range penalty attempt fell under the posts short.
The ball was cleared off the field to end a cracking game of rugby between 2 well matched sides.

Leek’s back row of Luke Staton, Reece Milner and Joel Booth come in for particular praise as they worked tirelessly in defence and attack to keep Leek ahead for all of the game.
Both sides played with great spirit and determination and was a credit to Level 7 rugby.

Leek’s 9th successive win and it’s 7th win at home maintaining its 100% home record, keeps them in 2nd place behind Stourbridge Lions who won at Stafford, 26-0.
Camp Hill moved ahead of Walsall to 3rd after winning at Old Salts.
Tamworth kept the pressure on with their 7th successive win at Shrewsbury, 11-10. Yards beat Veseyans to edge them within points difference of Old Salts and Newcastle beat Kidderminster to lift
Leek’s next opponents clear of the bottom 4.
Newcastle travel to EsterChem Park this Saturday with confidence in recent performances and knowing they beat The Moorlanders back in October.
It should be a tremendous encounter. Kick-off is at 2.15. All welcome as the season winds up to a really competitive ending with 7 games to go