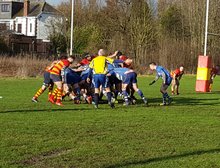 The Moorlanders secured their 11th consecutive win in the league with a come from behind performance in the 2nd half against a reinvigorated Old Salts....

.....side that will pose a lot of questions for teams in the run in.

Sam Hunt, Tom Scragg and Matt Leadingham started as the back 3 with George Hunt and Nick Palmer in the centre. Gary McDermott and Ollie Drew were at half back.
Lee Williams, Ed Cheadle and skipper Bobby Cheadle made up the front row with Ed Harrison and Ben Barlow at lock.
Reece Milner, Luke Staton and Joel Booth continued in the back row with Ad Smith, Phil Tomczak and Dan Needham making up a strong bench.

The pitch was in good condition but the wind was strong across and down field and against Leek in the 1st half as the game kicked off with Leek receiving.
An immediate knock on and then offside for man in front led OS to kick for the 1st lineout on Leek’s 5 metre line.
The catch and drive led to OS being held up over the line but from the resulting scrum, Leek’s backs forced a knock on in midfield and cleared.
On 6 minutes, Leek had a lineout on the OS 10 metre line. Quick ball and a straight running set up quick rucks and then a long pass found Nick Palmer able to sprint through the gap. His timed pass found
full back Sam Hunt on the left wing and he sprinted in from the OS 22 for the opening score of the day. A great try. Gary McDermott landed the difficult conversion wide left and Leek led 0-7 early.

From the kick-off, Leek tried to retain possession and run out of their 22 but a knock on at the tackle led to an OS scrum in centre field on the Leek 22.
A neat chip by the centre as the Leek backs came up allowed the right wing to win the race for the touchdown in the right corner. The conversion missed but OS was right in the game at 5-7 on 9 minutes.
It took another 3 minutes for OS to take the lead when a penalty was won for holding on in the tackle. The lineout near Leek’s 5 metre line led to a catch and drive. Held up, the powerful OS forwards then
had a number of pick and drives resulting in a fine try on the right again. The conversion missed but OS took the lead at 10-7.
On 19 minutes, an OS line on Leek’s 22 on the left led to the blind wing making a tremendous run to Leek’s 5 metre line and then the backs were under Leek’s posts but strong defence led to a knock on.

Leek were finding it difficult to retain ball and keep the danger away with the strong wind and were being hounded by a determined OS outfit smelling further scores. However Leek slowly started to play with better structure and on
28 minutes had a promising move outside the OS 22 when the referee penalised Leek for back chat whilst in possession. Very frustrating for the Leek players as the ball sailed into touch for an OS lineout in Leek’s half.
This lineout on the right then allowed OS’s backline to show their worth and quick safe hands and powerful running had Leek’s defence stretched. The dangerous left wing then received the final pass, beat 3 Leek defenders and touched down
for a great try in the left corner. Again the conversion missed but at 15-7, OS were within touching distance of a 1st half bonus point and Leek in danger of being overwhelmed.

Then the rain came for the next 10 minutes as the half closed with Leek finally getting control of the ball and forcing OS back in their own 22. A deliberate knock on in the 22 led to a Leek penalty in the 4th minute of added time and
Leek opted for the scrum. Driving the bigger OS pack back again produced another penalty and the same again as OS’s 8 couldn’t deal with the Moorlanders’ drive. After gaining no real advantage skipper
Bobby Cheadle asked Gary McDermott to go for goal and the fly half ended the half adding 3 points for Leek, keeping them in touch at 15-10.

No panic in the Leek ranks would have been the message from coach Lee Pickles at the interval with the strong elements in favour for the 2ndhalf and a dominant scrum. Patience and control would be needed and that became apparent
In the 1st minute of the new half with a penalty for Leek for not rolling away at the tackle. It led to a Leek line on the OS 5 metre line. A penalty then for in at the side and Leek opted to scrum.
Leek inched forward but another penalty against the OS front row for coming up led to another scrum. This time the Leek 8 marched towards the OS line with Joel Booth in control of the ball. The OS pack came up again and the referee
awarded Leek the penalty try.
(See attached photo of that scrum starting?
Gary McDermott converted and Leek took the lead at 15-17 on 46 minutes.

On 50 minutes a fracas involving several players from each side led to Reece Milner and the OS lock spending 10 minutes in the bin but Leek were now dominating possession and territory and on 56 minutes Tom Scragg made the OS line and then
Nick Palmer came close before a knock on stopped the move near the OS line.
2 minutes later and a lineout on the OS 22 on the right had Leek’s mauling 8 showing great control and with the ball in Ed Cheadle’s hands at the back, the relentless drive had the hooker crashing over for Leek’s 3rd try on 58 minutes.
The conversion was good and Leek extended the lead now to 15-24.
It was now all Leek as OS came under increasing pressure. Sam Hunt broke through and nearly scored after a great move in the backs. The forwards just failed with another drive from a lineout and then on 73 minutes the 4th try came.
A chip through from McDermott saw Tom Scragg touch down in the right corner. However, the referee adjudged the ball was on the touchline in goal and that it had been knocked back after the chip by an OS player. Scrum 5 to Leek.
From the right corner, the ball sped out to the Leek backs with a great move setting up winger Matt Leadingham to race through a hole and touch down. The conversion missed but at 15-29 and the bonus point secured, Leek had finally
overcome a dogged and determined OS rear guard in the 2nd half.
There was another score in the 5th minute of added time and following a quick tap penalty Nick Palmer ghosted through the tired OS back line for Leek’s 5th try. The conversion missed, the final whistle blew and Leek had won by 15-34.

It had been a good game of rugby with the elements playing their part and the teams demonstrating great control of the ball in the circumstances. Leek showed good discipline in the 2nd half and OS has clearly improved over their first half season.

The result keeps Leek in 2nd place (69 points) with OS in 10th place (26 points).
Leaders Stourbridge Lions (73 points) emphatically stopped Tamworth’s (5th and 52 points) recent superb run by 40-5 and 3rd placed Camp Hill (66 points) won comfortably at Shrewsbury (12th and 13 points) by 42-3.
Stafford (8th and 30 points) were beaten heavily at home by a resurgent Veseyans (up to 6th and 38th points) by 37-3 and Walsall (4th and 57 points) got back to winning ways with a comprehensive 52-0 win at Newcastle (9th and 26 points).
Kidderminster (7th and 38 points) drew at Old Yards (11th and 22 points) 19 all.
Old Yards visit EsterChem this Saturday, 11th March. KO is 3pm but there is an idea to try and agree an early KO at 2pm, so that the game can conclude before the England v Scotland game commences at 4pm.
Check the website this week if that can be arranged.
Hot food available from around 1pm.

Italy v France is on the big screen in the clubhouse at 2.30pm on Saturday and the club will be open on Friday, 10th March for the Wales v Ireland game . KO 8pm. Doors open at 7,30pm.