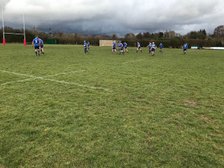 Leek suffered defeat at The Linney on Saturday against a fiercely determined 2nd half defensive effort from Ludlow and came away pointless and disappointed.

Leek suffered defeat at The Linney on Saturday against a fiercely determined 2nd half defensive effort from Ludlow and came away pointless and disappointed.

James Floyd was back and starting at full back with Kini Buli and Matt Leadingham on the wings.
Gary McDermott and Tom Scragg were in the centres and Sam Hunt and Ollie Drew at half back.
Lee Williams, Ed Cheadle and Bobby Cheadle were in the front row with ben Barlow and skipper Luke Hardern at lock.
George Hunt, Joel Booth and Jake Bainbridge were in the backrow.
Dave Allen, Will Graham and Jack Conlon were on the bench.

The Linney was sodden from the rain and the top half of the pitch, where a lot of the game was to be played would be turned into a near quagmire by the final whistle as the wind blew down field with Leek defending it.
Probably, the quickest try scored this season then happened as Leek went behind on 28 seconds.
James Floyd kicked clear and chased his kick but the return kick, high and hanging allowed 2 Ludlow centres to close in on sam Hunt as he attempted the catch on the Leek 22 with a difficult wind.
Unfortunately, he couldn’t make the catch and a simple kick ahead and touchdown gave the home side the perfect start. The conversion was good and Leek were 7-0 down early.

The next 18 minutes produced some excellent play from both sides as they tried to work an opening, but these 2 sides are well matched and it wasn’t until a penalty came Leek’s way on 18 minutes, did the next score occur.
Leek won a penalty on Ludlow’s 10 metre line, for playing the man without the ball and for the first time, Leek moved into the Ludlow 22 with a lineout on the left.
George Hunt burst through the line with the ball and then Leek set up a driving maul that reached the Ludlow line before a deliberate pull down gave the referee an easy decision in awarding Leek a penalty try. 7 all.

On 28 minutes, Leek conceded a penalty on their own 22 for holding on in the tackle and the Ludlow wing duly converted to give Ludlow the lead back at 10-7.
3 minutes later Ludlow were reduced to 14 men after the centre was yellow carded for a blatant entry into the side of the ruck, but Ludlow continued to press and Leek found it very difficult to get out of their own half and the increasingly cut up half of the pitch.
Ludlow ended the half scoring another penalty for off feet at the ruck and deservedly went into the break with a 13-7 lead.

The 2nd half opened well for Leek as Sam Hunt converted a 43rd minute penalty as Ludlow dropped the maul after a 20 metre drive by the Leek forwards was halted on the Ludlow 22 illegally. 13-10.
Leek were now in control of the ball and territory as it was Ludlow’s turn to defend the wind and cut up half and on 58 minutes, Jake Bainbridge set up the maul and Leek advanced to the Ludlow 22.
Ludlow collapsed it and the Ludlow forward was yellow carded.

Leek opted for the line and then as Leek set up the ruck, the Ludlow fly half dived into the ruck and he was yellow carded. Down to 13 men, it looked nigh on certain Leek would make their numerical advantage tell as they had all the possession and scrums on the Ludlow 5 metre line.
10 minutes of concerted effort still failed to bring the try Leek searched for and then the inevitable happened.
Leek had a knock on. Ludlow cleared and then another knock on gave Ludlow a scrum from which the centre kicked ahead. Will Graham and Matt Leadingham looked to have the ball covered but managed to collide with each other and the ball ricocheted to the Leek goal line where a grateful centre touched down for the score on 27 minutes. The conversion missed but at 18-10, leek needed 2 scores to win and one to get a losing point.

Neither looked likely in the final few minutes and the game ended with the home side elated at their win and Leek deflated at their loss.
These 2 sides are closely matched and the game was a great contest given the conditions. Handling was generally excellent from both and tactically Leek understood their game plan well but just couldn’t quite execute it on the day.
Leek remain in 4th on 50 points as Ludlow move up to 6th on 45 points.

This Saturday Leek 1sts have another week off and it is the final day of the 6 Nations when all 3 games are played after each other. The club is open all day, St Patricks Day, with a live Irish band on post the England v Ireland game which kicks off at 2.45pm

Leek Colts also play at home on Saturday, so again, you are invited to come and watch the future of the club in action.
Leek’s next league game is on Saturday, 24th March at EsterChem Park against local rivals Newcastle. Kick-off is at 3pm.

Photo – Leek’s players before the game at Ludlow Saturday with the rain clouds now disappearing northwards.