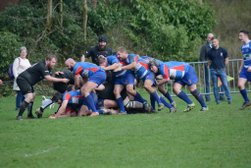 Leek completed their home league fixtures this season with a bonus point win against 3rd placed Spartans to avenge a narrow defeat in December.

The win leaves Leek just one point behind Spartans in the race for 3rd place with Leek now unable to finish any lower than 4th.
It was Leek’s 9th of 11 home wins this season with just 2 defeats at EsterChem Park.

Sam Hunt, Tom Scragg and Nick Palmer made up the back 3 with James Floyd and Rob McDermott in the centre.
Gary McDermott and Ollie Drew were at half back.
Bobby Cheadle, Ed Cheadle And Lee Williams were in the front row and with both primary locks now out for the season, Andy Thompson and Luke Staton were in the 2nd row.
Joel Booth, Jack Conlon and George Hunt were in the back row.
Kini Buli, Will Graham and Jake Bainbridge made up a strong bench.

On a glorious day for rugby, the big crowd was treated to a great game of rugby.
The 2 teams are very tightly matched and it was proven in the 1’st half with the game taking the full 40 minutes for the first score.
Leek had 2 penalty attempts on 2 minutes and 36 minutes, both of which Sam Hunt pushed wide and in between, Spartans, on 9 minutes, had a try disallowed as the referee deemed a complete tackle had been made before the Spartan centre got to his feet.
The try when it came was classic Leek this season. A Sam Hunt kick into the Spartans 22 had the full back trying to kick clear but the kick was charged down and then in the scramble for the ball, Spartans were penalised for slowing the release.
Leek opted to kick for the lineout on the right near Spartans’ 5 metre line. The catch and drive was good and Jack Conlon at the back of it all crashed over for the opening score. Sam Hunt missed the conversion and the half time whistle went with Leek holding a slender 5-0 lead. See above photo of Jack’s try about to be scored.

The 2nd half was to prove a much more inventive half as both sides tried more adventure and on 45 minutes, Sam Hunt kicked a penalty for offside with Leek pressing on the Spartans 22. 8-0.

On 50 minutes, Leek were in full flow with a move from left to right involving forwards and backs and as the ball was being passed to Tom Scragg, a one handed interception by the Spartans winger was penalised and he was yellow carded. Leek again kicked for the line deep in the Spartans 22 on the right. The catch and drive was good and it seemed a try was inevitable but for a Spartans prop coming in at the side and he too was yellow carded by the referee.
The resulting lineout from the penalty again saw the catch and drive and this time with Spartans depleted the drive was unstoppable and George Hunt went over on 52 minutes. Brother Sam kicked the conversion and Leek was up to 15-0.

It was now about pressure to see if Leek could add to the score whilst Spartans were 2 men down and after Spartans had looked promising reaching Leek’s 22, the turnover saw Will Graham sprint into the Spartans half. The desperate defence was penalised again for slowing the release and from the lineout on the left on the Spartans 22 some patient rucking was rewarded as the line drew closer and scrum half Kini Buli dived under the defence to score by the posts.

See attached try scored by Kini Buli by the posts.

Sam Hunt missed the conversion but at 20-0, Leek were now looking to get the 4th try for the bonus point.
With Spartans back to 14 men, they showed great fighting spirit now as they looked after the ball better and a series of good passing and rucking finally broke the Leek defence on 64 minutes with a try wide right.
The conversion missed but at 20-5 the Spartans had a glimmer of hope with 15 minutes to play. The next score would be critical and it went to Leek on 70 minutes and was the try of the day by Sam Hunt as the full back latched on to a swift pass, side stepped inside and sprinted through a hole, only he could see, to score under the posts from a run started on the Spartans 22. He converted his own try and at 27-5, it was now a question of keeping Spartans away from a bonus point.
Credit again to the visitors, they scored their 2nd try on 78 minutes when the centre burst through some tired tackling, again after good retention by the forwards. The conversion was good and the game ended a couple of minutes later without further score at 27-12.

A great defensive performance by Leek was the key to this win and then dominating the game at the start of the 2nd half allowed the Moorlanders to build the scores into a 5 point win.
Joel |Booth at No. 8 was man of the match as the forwards played with discipline and purpose for the full 80 minutes.

This Saturday Leek travel to Tamworth for a 3pm KO. Spartans travel to Ludlow for their last match of the season knowing a win there will see them keep 3rd place but Leek then has a postponed match to play on Saturday April 28th. It’s away at runaway league winners, Whitchurch and it’s sure to be a festive occasion as the Shropshire side look to go through the season undefeated. KO is 3pm.
Still all to play for then for 3rd place this season.
Author John McDermott