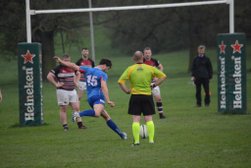 Leek recorded their 4th straight 5 point win to overhaul Spartans for 3rd place as the Warwickshire side lost at Ludlow. So Leek will end the season as they did the last season in 3rd place with one game to go at runaway leaders Whitchurch this Saturday.

Leek recorded their 4th straight 5 point win to overhaul Spartans for 3rd place as the Warwickshire side lost at Ludlow. So Leek will end the season as they did the last season in 3rd place with one game to go at runaway leaders Whitchurch this Saturday.

The Moorlanders’ back division was as last week with Sam Hunt, Nick Palmer and Tom Scragg in the back 3 with James Floyd and Rob McDermott in the centre. Gary McDermott and Ollie Drew were at half back.
Lee Williams, Ed Cheadle and Bobby Cheadle were in the front row with Andy Thompson joined by Jake Bainbridge at lock. George Hunt, Joel Booth and a first start at flanker for Will Graham completed the back row.
Coach Lee Pickles, veteran Luke Granger and debutant Lewis Dunleavy made up an unlikely bench.

On a warm afternoon at Wiggington Park, Tamworth started well and put Leek under pressure for the opening 15 minutes of the game, pinning the visitors into their own half but the Leek defence was solid and the first opportunity Leek had in the Tamworth 22 resulted in 3 points from the boot of Sam Hunt as he slotted a penalty for offside. 0-3.
Leek then took control of the game as Jake Bainbridge made a couple of breaks. Sam Hunt missed a 25th minute penalty for in at the side of the ruck and then a series of 4 penalties in the red zone still didn’t result in any score for Leek as Tamworth defended well before clearing on 30 minutes. However, Leek weren’t to be denied as the half wound down and another couple of penalties near the Tamworth line saw Rob McDermott take a quick tap and charge over for a deserved try for Leek. See Rob about to score Leek’s 1st try.
Sam Hunt converted and Leek led 0-10 as the half ended.

With the wind against 2nd half, Leek might have expected to struggle as the home team looked to get back in the game and an opening minute penalty for Tamworth for not rolling at the ruck resulted in the penalty attempt but the ball struck the right post before Leek cleared. Tamworth continued to pile the pressure on Leek for the next 10 minutes and came close a couple of times from forward drives but each time, Leek defended exceptionally. A penalty for Leek lifted the siege on 49 minutes and Tamworth had a lineout on half way on their left. However, the ball was fumbled forward in midfield and Leek’s backs were quick to seize the opportunity to counter and as the ball sped to James Floyd, the big outside centre skipped past 2 defenders and scored on the left after 51 minutes. Sam Hunt converted. 0-17. See Sam’s conversion below.

George Hunt nearly scored after charging down a clearance kick on 54 minutes and on 62 minutes a penalty for not rolling away at the ruck gave Leek a lineout on the right in the Tamworth 22. A good catch and rucking blind, the ball was then released wide left and Leek worked a great move to allow Tom Scragg to go over unopposed on the left. The conversion missed but at 0-22 and 15 minutes to play, Leek were now looking for the 4th try.

Then Tamworth gathered themselves and enjoyed a series of possessions but couldn’t break a strong, resolute Leek defence. A wayward lineout on the left for Tamworth on 75 minutes gave Leek another possession and fantastic hands right with some slick movement and pace gave Tom Scragg the chance to score his 2nd try and Leek’s 4th of the day to claim the bonus point win. Sam Hunt’s conversion was good.
0-29.
There was just time for coach Lee Pickles to make his first appearance of the season and he caught the kick-off superbly, setting up a ruck from which Leek won a penalty from which the game ended.

This was a hugely satisfying win for Leek with the key being the solid defence and then the movement of the backs.
Man of the match, Jake Bainbridge continues to impress playing lock or back row.
Lewis Dunleavy came on for 20 minutes at lock and proved yet again that Leek’s youngsters are ready to step up to the first team and make themselves count.

With 3rd place now confirmed, Leek will enjoy a final league match of the season at Whitchurch on Saturday with the league winners determined to maintain their 100% record of a fantastic season for them.
Leek will be looking to upset the festival day if they can and the team would like your support on the final day of the season. Kick-off is at 3pm.
Author John McDermott