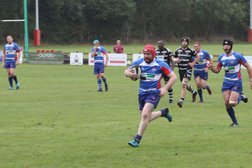 Welcome to a new league season in Midlands West 2 (N) where the Moorlanders will be hoping to improve on their consecutive 3rd place finishes in the last 2 seasons.

The season has started brightly for Leek with a tremendous 2nd half performance at Veseyans Saturday, where they came from behind to register 33 unanswered points and secure what was one of only 2 bonus point wins on the opening day in their league.Returning to Leek this season are brothers Jack and Joe Newton Taylor who both started as Leek youngsters rose to the 1st team in their teens and then sought to improve their careers in higher divisions before coming back to Leek this season.
Jack started at full back with Kini Buli and Dan Sharratt on the wings. Ollie Drew and Sam Hunt were starting at half back with Tom Scragg and Nick Palmer in the centres.Joe Newton Taylor, Ed and Bobby Cheadle were in the front row with skipper Luke Hardern and Ben Barlow making up a familiar lock partnership.Joel Booth, George Hunt and Andy Thompson made up an experienced back row.Adam Smith, Joe Cooper and Jacob Hartley were on the bench.
The game started just after a big downpour and it took only a minute for Leek to register its first yellow card. Sam Hunt had chipped through the advancing Vs defence and at the ruck, Leek left the ball behind and ran blind. Catching the defence asleep,Leek were penalised at the ruck and were prevented from taking a quick penalty by Ollie Drew who was duly sent to the bin. The Vs kicker converted the penalty and Vs led early 3-0.

On 4 minutes, Vs reached Leek’s line but good defence led to a penalty and the clearance to the 22 led to a first backs move from right to left. The ball sped along the line and Jack Newton Taylor received the ball in some space that allowed him to round one defender, hand off another and duly score under the posts on 6 minutes. Sam Hunt converted to give leek the 3-7 lead.From the kick-off, Leek dropped the ball and a player in front picked up to hand Vs another penalty which was converted to bring the score to 6-7.
On 11 minutes, skipper Luke Hardern and Vs hooker were sinbinned for their 2nd coming together as the referee sought to put some order into the game as the players adjusted to the first half of a new season.Leek’s rustiness continued as they won their first scrum on 14 minutes just inside Vs half. The ball was kicked out by Leek and Vs scrum half quickly took advantage down the blindside. Good inter passing and support from the flanker saw him go over in the left corner. The conversion missed but at 11-7, it was already proving to be a frustrating afternoon for Leek followers.

On 20 minutes, an offside gave Sam Hunt the opportunity to kick for a lineout on Vs 22 on the left. A good catch and drive to the Vs line then allowed Dan Sharratt to peel off and score leek’s 2nd try in the left corner. Hunt’s conversion was just wide but Leek regained the lead at 11-12.
6 minutes later and the lead changed hands again. Leek were running the ball in their own 22 when an unfortunate pass led to an interception and a simple try under the posts. The conversion was good and at 18-12 after 28 minutes, the game was still full of mistakes as the sides took advantage of each other.On 38 minutes Dan Sharratt was injured and Joe Cooper came onto the left wing. Leek then won a series of penalties in the Vs 22 as the half closed out and the final play was a 5 metre scrum but the referee awarded Vs a penalty as the scrum collapsed and the half ended with Vs holding an 18-12 lead.

Half time proved advantageous for Leek because coach Lee Pickles had a dramatic effect on the team’s performance in the 2nd half as the score line would prove. From the kick-off, Vs dropped the ball and were then offside. Sam Hunt converted the penalty. 18-15. 4 minutes later and another penalty for offside saw Sam Hunt convert again to even the scores at 18 all.With Leek enjoying the possession and cutting errors out, it took until the 51st minute for Sam Hunt’s 3rd successive penalty after an offside decision in the Vs 22. It led also to a yellow card for persistent infringement. 18-21.
Another yellow card came on 65 minutes after Nick palmer made a good break left. At the ruck, Vs were offside and as the ball came right, the Vs wing interfered and was yellow carded. Leek opted to scrum on the 5 metres.The scrum went down with Vs under pressure and from the next scrum, as leek pushed their way to the line, Vs infringed again and the referee awarded a penalty try on 70 minutes. 18-28.
On 73 minutes with Vs attacking down the right, Joe Cooper intercepted on his own 10 metre line and sprinted for the left corner. Taking the tackle just at the line, the wing then dotted the ball down over the tackler for Leek’s bonus point try.

Please see attached photo of Joe in full flight for the left corner. Photo, courtesy of Mark Cooper.The conversion failed but at 18-33, Leek were more than 2 scores ahead.3 minutes later and Ollie Drew finished off a fine Leek passing movement between forwards and backs scoring under the posts. Sam Hunt converted. 18-40From the kick-off, Leek worked the ball right and with a Tom Scragg break, it left Kini Buli a chance to sprint down the wing and score in the right corner. The conversion missed. 18-48.Leek had scored 4 tries in 10 minutes to end the game on a high.

All players, including the entire bench had a good workout with Vs proving a tough nut to crack on the opening day of the season.It was a good start for Leek where they put a rusty first half behind them to exert pressure and play some decent spells of rugby. Next week, Leek entertain Walsall at EsterChem Park with a 3pm kick off.
Walsall also started the season well with a 33-10 win at home to Crewe & Nantwich, so a highly competitive match is expected between these Staffordshire rivals.Please come down and support the team as they open their home league programme.