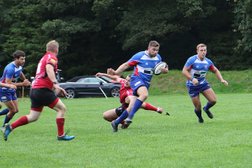 It meant Leek maintained their good start to the season and definitely stepped up a gear from last week.
The day started with remembrance of 2 Leek members who have passed in the last week.
Gordon Hansell, well known teacher and coach in Leek and Mick Nettel, well-known local footballer but later a junior rugby coach at Leek helping coach his son Adam who later became 1st team captain.

There was a minute’s applause for them in the sunshine with a large crowd present to pay their respects. RIP.
Leek’s team was virtually unchanged from last week with Jack Newton Taylor and Kini Buli being joined this week by James Floyd, in the back 3, after Dan Sharratt’s injury last week.
Tom Scragg and Nick Palmer were in the centres and Sam Hunt with Ollie Drew at half back.
Joe Newton Taylor, Ed Cheadle and Bobby Cheadle were in the front row and Ben Barlow and Luke Harden were at lock.
Andy Thompson, Joel Booth and George Hunt were in the back row.
Adam Smith, Liam McDermott and Will Graham were on the bench.

From the kick-off, Walsall knocked on and a player in front gave Sam Hunt an early chance for 3 points but his aim was awry. Leek dominated the opening 5 minutes and when Sam Hunt threw a long pass to switch the attack, no-one saw the Walsall fly half anticipate superbly and intercept on his own 10 metre line to run under the Leek posts for the opening score. He duly converted to hand Walsall an early advantage. 0-7.
From the kick-off and next ruck, Joe Newton Taylor was yellow carded for a swinging arm and then Ollie Drew was penalised for holding on as the ball was lost. The Walsall 10 had a good chance to increase the lead but his shot went wide on 11 minutes.
It took Leek until the 25th minute to draw level after a strong scrum on the Walsall 22 that led to a series of rucks close to the Walsall line before Joe picked up and crashed over for a try under the posts. Sam Hunt converted and the scores were level at 7 all.
The rest of the half was stop and start as both sides tried unsuccessfully to dominate play and territory and aside from the Leek scrum, the sides were closely matched.
H/T 7-7.

Enter Leek coach Lee Pickles at half time and, as last week, Leek came out of the blocks in the 2nd half to take the game by the scruff of the neck.
A couple of strong scrums in the Walsall 22 had the reds in trouble but Leek couldn’t make the breakthrough until the 53rd minute when a scrum on the Walsall 10 metre line led to a strong run by Jack Newton Taylor, taken on by Kini Buli and then the forwards to the Walsall line before scrum half Ollie Drew picked up and scored with a try on the post. Sam Hunt converted and Leek led 14-7.
Leek had their tails up now and on 61 minutes Nick Palmer scored his try on the right after a good lineout on the left outside Walsall’s 22. The backs combined well before Nick broke a couple of tackles near the line to score. The conversion missed but at 19-7, Walsall needed to up their game now and so it happened through their redoubtable No.6. His break into Leek’s 22 on 64 minutes led to a series of rucks near the Leek line and a series of penalties against Leek. Walsall opted for lineouts from the penalties but Leek’s defence was ferocious and the siege was lifted on 70 minutes with a penalty.

Then, on 78 minutes, Leek scored their 4th try through wing Kini Buli. Another scrum on Walsall’s 10 metre line had the backs at full pace. James Floyd broke the tackle (see attached photo of incident) and Hunt and Palmer combined to give Kini Buli the ball in the left corner for a good try. Sam Hunt then produced a great conversion to push the game beyond Walsall at 26-7.
Still there was 10 minutes added time during which Walsall tried everything to prize some points out of a stubborn Leek defence but eventually to no avail and the game ended with Leek celebrating a tough win against a very creditable Walsall effort.

The win maintains Leek in 2nd place at this early stage with the Moorlanders and Ludlow scoring 2 bonus point wins so far.
Next week, Leek has a week off with a bye in the 1st round of the RFU Intermediate cup but return to action on the 29th September with a trip to pre-season favourites Camp Hill who have already won both opening games away from home. Ludlow, meanwhile, will have a tough trip to Walsall and their new 4G pitch.
Next home league game is on 6th October against local rivals Crewe & Nantwich. KO is 3pm.
Author John McDermott