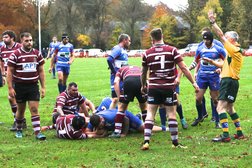 Leek came back to EsterChem Park this weekend and stopped the rot of 2 defeats with a hard fought home win against local rivals Newcastle.

In truth, it was a poor game without much sustained pressure one way or the other and Leek will be disappointed they could only score 2 tries given their scrum dominance.
Nevertheless a win is a win and 4 points moves the Moorlanders to 20 points, now level with Newcastle after 7 games.

Jack Newton Taylor, Kini Buli and Tom Scragg were the back 3 with James Floyd and Nick Palmer in the centres. Sam Hunt and Ollie Drew were at half back.
Joe Newton Taylor, skipper Ed Cheadle and Bobby Cheadle were in the front row with DJ Allen retaining his lock position and his partner, Jake Bainbridge.
Goerge Hunt, Joel Booth and Lee Williams made up the back row.
Ad Smith, Dan Needham and Ben Barlow were on the bench.

Newcastle were under strength due to a wedding and so it was no surprise to see Leek dominating possession and territory as the visitors organised themselves well in defence.
On 14 minutes, Leek won a penalty for offside at the lineout and Sam Hunt's kick for the next lineout was superb as it gave Leek a 5 metre chance.
George Hunt took the clean catch and after a couple of rucks near the line, Joe Newton Taylor picked up and crashed over for the opening score on the left.
See attached photo of Joe scoring.
The conversion missed but Leek led 5-0.
From the kick off though, Leek managed to lose possession on their own 22 and were then caught offside as Newcastle ran the ball wide.
The penalty attempt was good and on 17 minutes it was 5-3.

The game then settled into the pattern of Leek possession and territory with Newcastle defending Leek's across field movement of the ball easily, until Leek lost possession again on 27 minutes.
Newcastle countered and won another penalty for not binding at the ruck but the penalty attempt went wide.
Again the pattern resumed with Leek's possession and movement looking good but without penetration as Newcastle comfortably defended neutral territory. It needed a change of tactics
or a penalty and on 38 minutes, the latter came for a shoulder only tackle. Sam Hunt kicked for the lineout again and as Leek drove for the line with Bobby Cheadle in control of the ball,
it looked an inevitable score until near the line, the referee penalised Leek for not binding. Leek soon won possession back and with the 1st half in overtime a great move on the right finally had Newcastle's defence outflanked.
Joe Newton Taylor's pass to Jake Bainbridge had the big lock rumbling towards the line but his inside pass went astray and Newcastle's clearance kick left Leek with a lineout outside the 22 on the right.
From it, Leek set up a couple of rucks and Newcastle were penalised for offside and with the last act of the 1st half, Sam Hunt converted the penalty to give Leek an 8-3 half time lead.

Leek coach, Lee Pickles changed things at half time and it made an immediate difference to the pace of the Leek attack and it caught Newcastle out early.
With 3 minutes of the 2nd half gone, Leek committed Newcastle defenders on the half way, the Leek forwards took the ball on and created some quick rucks.
The final one, about 10 metres outside the Newcastle 22 on the left, then allowed Ollie Drew to spot Jack Newton Taylor taking a blind side position and the young Leek full back sprinted in unopposed
to score Leek's 2nd try. Again the conversion failed but at 13-3, Leek looked forward to pressing home their advantage.
From the kick off again though, Leek contrived to lose the ball and only a well timed George Hunt tackle prevented a threatening Newcastle position.

Leek upped their pace and on 56 minutes with Dan Needham at 10 and Sam Hunt at 13 now, Leek won a penalty on Newcastle's 22 which Sam Hunt converted to increase Leek's lead to 16-3.
It was now time for Leek to think about the try bonus point as Newcastle's attacking threat was limited and it looked like a neat chip through on the right which led to a couple of Leek penalties would
be the key to the next score. Leek had a 5 metre scrum and it looked inevitable the pack would walk the visiting scrum over their line. Leek's disciplined drive brought the ball, at the feet of
No.8 Joel Booth, to the line before the referee again intervened deciding the scrum had gone round 90 degrees and from the next scrum Leek was penalised for not straight.
In the last 10 minutes, Leek tried hard to set up another positon from which to dominate the ruck or maul but were again thwarted by courageous defence and poor decision making.
No more scoring was to come as the game petered out with Leek moving the ball across field without much threat to the well disciplined Newcastle defence.

Despite the type of game played, Leek can be positive they have got back to winning ways and will have the week's training sessions to add some thought and deed to their attacking options.
It was good to see Sam Hunt back and Ben Barlow and with both Newton Taylors on the score sheet, the side still looks like its better days are to come this season.

In other games, Tamworth, undefeated league leaders, won impressively at Walsall 23-0. Ludlow lost their 2nd consecutive away game at Wolverhampton as Stafford and Telford both lost heavily
proving that promoted teams in this league face a tough challenge.
Improving Crewe & Nantwich beat Leek's next league opponents Spartans by 20-10 as the league takes a break this weekend for the 3rd round of the Midlands Intermediate RFU Cup.

Leek must travel to Midlands 2 West (South) opposition Barkers Butts who are similarly placed in that league as Leek is in the North, so it should be a well contested 3rd round tie.
Kick off is at 2pm.

On November17th, Leek travels to Spartans and then November 24th is another cup weekend before a series of 3 league games in December ends the opening half of the season.
On December 1st EsterChem Park welcomes Stafford followed by the away fixture at Tamworth on December 8th and then it's back to EsterChem Park on December 15th for the Christmas game versus Telford.

Finally, a big thank you to all those Leek Rugby Club volunteers and helpers who contributed to a fantastically successful Bonfire Night Fireworks Display at the club on Saturday.
Your efforts have meant the club has increased its club development fund significantly. Well done.