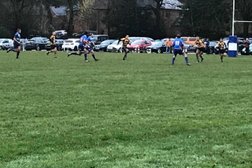 In a highly entertaining fixture, these 2 Staffordshire sides cooked up an 8 try see saw of a game that went to the last play to determine the outcome.

Partisan support would tell you Leek or Stafford should have won but in the final analysis a draw was respectfully the right result and both sides come away with 3 league points.
Leek’s back division saw a number of changes plus 2 more on Friday as injury and unavailability once again disrupted the side.
Will Graham started at full back with Adam Varley and Joe Cooper on the wings. Lee Williams started at 12 with Jack Newton Taylor at 13. Ollie Drew was just able to start at scrum half despite nursing a hand injury with Dan Needham at fly half.
The forwards were in more familiar mode as regular front rowers Bobby Cheadle, Ed Cheadle and Joe Newton Taylor were supported at lock by skipper Luke Hardern and Ben Barlow. Joel Booth was back at No.8 with George Hunt and James Thomson on the flanks.
Nathan Bull, Billy Kidd and Andy Thompson were on the bench.

On a perfect pitch and in calm conditions, Leek started poorly giving a penalty away at the tackle and allowing Stafford to kick for a lineout in Leek’s 22 on the right in the opening minute.A good catch and then rucks against a slow starting Leek pack had Stafford breaching the line and scoring the opening try inside 2 minutes on the right. The conversion failed but Stafford led early at 0-5.
Leek’s poor start continued as they were penalised again on 7 minutes for a high tackle. That led to pressure inside the Leek 22 which the home side defended well before George Hunt was yellow carded for slowing the ball at the ruck on 9 minutes. Stafford’s 5 metre scrum option was right as the No.8 picked up to set up 2 quick rucks before the centre burst through the line to score by the posts. This time the conversion was good and Stafford increased their lead to 0-12 on 12 minutes.

Leek needed to respond and 10 minutes of more accurate rugby gave the Moorlanders their first chance of a score which they gratefully took. A lineout win on the left of Stafford’s 22 had Leek’s forwards rucking then backs passing right before coming back left where the stretched Stafford defence couldn’t deal with Jack Newton Taylor’s step and pace and the centre scored the 1st of a brace of tries to get Leek on the score board with 22 minutes gone. He couldn’t quite convert his own try but Leek had reduced the deficit to 5-12.
Stafford came straight back at Leek after the ball was kicked away allowing the visitors to kick deep and a strong follow up put pressure on the defence in Leek’s 22. Leek were penalised for in at the side of the ruck and once again Stafford opted to scrum on 27 minutes. The No.8 picked up again, the quick ruck then great continuity across the line before the fly half burst through to score Stafford’s 3rd try on the right. The conversion missed but at 5-17 Leek were staring defeat in the face with only 30 minutes gone.
Leek’s woes grew as Ben Barlow and then Lee Williams both went off to knee injuries in the 30th and 36th minute respectively. George Hunt moved from flanker to centre as Andy Thompson and Billy Kidd came on as replacements.

As the half entered stoppage time, Leek won a penalty for crossing and then another penalty left the Stafford skipper receiving a team warning as Leek opted for the lineout on Stafford’s 5 metre line.
A catch and drive and then a couple of rucks gave Joe Newton Taylor the opportunity to pick up and crash over from short range. Although his brother Jack couldn’t add the extras, the half time whistle then blew with Leek trailing 10-17 and everything to play for in the 2nd half.
Lee Pickles, as so often this season, made a difference at the half and his charges were level with Stafford after less than 5 minutes of the restart. Winning a penalty after a knock on, Leek opted to scrum in the Stafford 22 and after a couple of resets as Leek’s pack dominated the shove, the referee awarded Leek a penalty try as the scrum was taken down close to the Stafford line. 17 all.
On 47 minutes, Jack Newton Taylor had to make a try saving tackle after the Stafford full back started a counter attack from his own 22. The right wing sprinted down the line and only a superbly timed tackle prevented a score. Stafford continued to press and won a penalty on 49 minutes for offside and this time they opted to kick the easy 3 points to nudge the visitors back into the lead at 17-20.

The next 10 minutes saw Leek looking to land a decisive blow but despite a series of scrums from Leek in the Stafford 22, they came away empty handed but then on 63 minutes the Stafford lock was yellow carded for handling in the ruck and from the opted scrum Leek won another couple of penalties and still opting to scrum and turn the screw, it looked inevitable that a penalty try or another card would produce the conditions for Leek to overcome a dogged Stafford defence. Instead, Stafford won an unlikely penalty at the scrum as Leek’s dominance in the Stafford 22 surprisingly was penalised. However, the long clearance kick failed to find touch as Jack Newton Taylor fielded the kick deep inside his own 22 on the left.

What happened next will live long in the memory of memorable tries at Esterchem Park as the young full back sprinted across the field to avoid the onrushing follow up by the Stafford backs before cutting back inside where the slower players were gathering. Darting in between the forwards, Newton Taylor then outsprinted the remaining Stafford backs to score a try under the posts after a 90 metre run. The centre then converted his own try to hand Leek the lead for the first time on 68 minutes at 24-20 and also win the try bonus point. The home support was ecstatic as they sensed the tide had turned.
However, the downside was that Andy Thompson was yellow carded at the try celebrations but still Leek were beginning to wear a tiring Stafford outfit down and when on 74 minutes Leek won a penalty in the Stafford 22, the decision to scrum was an obvious one. Another 2 penalties from resulting scrums still didn’t produce a warning for Stafford and Leek then let the ball out but were penalised for not releasing near the Stafford line. However, the penalty was reversed as the Stafford lock was adjudged to have made a dangerous kick and a 2nd yellow resulted in the red card produced as the clock ticked past 80 minutes.
Jack Newton Taylor kicked the penalty to extend Leek’s lead to 27-20 and with not much time left now Leek just needed to stay calm and play accurate rugby.

This game had proved nothing was consistent though and Leek gave away 2 penalties in succession as Stafford powered forward and after a 5 metre scrum, with Leek defending tenaciously, the Stafford fly half kicked a delightful ball to the right wing who caught it and darted over for a try in the right corner.
With the last act being the conversion from the 22 on the 5 metre line out wide on the right, the Stafford fly half is to be commended for producing a superb conversion under pressure to level the scores with the last act. 27 all.
Leek will have believed they lost it and Stafford will believe they deserved nothing less. Both observations could be right but the fact remains it ended a draw with both sides getting something out of the game.
Welcome to league rugby at level 7! Fantastic.

Leek’s changing side every week is not helping consistency and they will have to be at their best to get anything from the game at Tamworth this week. The south Staffs side has been the revelation of the league this season winning their first 8 games before coming unstuck this weekend at Crewe & Nantwich, losing 47-7. That defeat enabled Ludlow to leapfrog them at the top of the table as they easily beat Spartans.
Leek retain 5th spot but lose ground on winners Camp Hill and Wolverhampton. Meanwhile Crewe and Walsall, slow starters this season, are both showing progress from the bottom half of the league now.
KO at Tamworth is at 2-15pm
The last game of the league season before Christmas is on December 15th when Leek welcomes Telford to Esterchem Park. KO is at 2.15 but there is plenty going on at the club that day so get down early as there is a 3 course lunch advertised by club manager Anna and then after the game there will be Christmas carols with Keith on the organ and the players vying for who can sing the best or at all!
Come and enjoy the festive seasonal fun at Leek Rugby Club on December15th. It will be a great atmosphere as usual for this festive finale at the club.
Author John McDermott