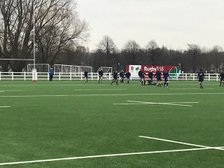 Leek travelled to Walsall for the first game of 2019 and were on the wrong end of their worst defeat of the season.

Conceding 6 tries, 3 in each half, Leek's inconsistency will need to be addressed urgently to prevent the season from worsening.

Jack Newton Taylor, Ollie Drew and Isaac Reaney were the back 3 with Tom Scragg and George Hunt in the centres. Sam Hunt and Dan Needham were at half back.
Ed Cheadle, Bobby Cheadle and Joe Newton Taylor were in the front row with DJ Allen and Lewis Dunleavy at lock.
Skipper Luke Hardern moved to No.8 with Billy Kidd and Tom Fairhurst on the flanks.
Matt Tanner and Jake Hartley were on the bench.

Walsall's new 4G pitch (See attached photo with the Leek squad warming up on it prior to the game) was a novelty for the Leek players and it promised to be a good game of rugby after the 2 team exchanged penalties in the opening 10 minutes. Walsall scored on 2 minutes after handling on the ground on Leek's 22 gave the fly half an easy opportunity and then on 8 minutes Sam Hunt equalised after Walsall were caught offside on their 22. 3 all.
On 16 minutes, Dan Needham's clearance kick to Walsall's 22 led to a counter which ended with a scrum on Leek's 5 metre line after the forwards were held up over the Leek line. The Walsall 8 picked up and crashed over for the opening try of the game. The conversion missed and Walsall led 8-3.

10 minutes later and Walsall's 2nd try came from a lineout after a penalty in the Leek 22 was kicked to touch. The maul broke up as Leek players stood around and the Walsall flanker ambled over the line without any contact. This time the conversion was good and Walsall led 15-3.
It got worse for Leek on 37 minutes after a knock on outside their own 22. The Walsall scrum was solid. A pick up and run blind with 2 passes saw a simple wing try in the right corner. The conversion was good. 22-3.
The half ended with a Leek penalty for offside and the option for the lineout was clearly correct but as would be the case for the whole game, Leek's lineout wasn't working and a knock on from the attempted catch 5 metres from the Walsall line led to a scrum and the end of the half.
22-3.

At the half, Ollie Drew came into scrum half, Dan Needham to 10 and Sam Hunt to centre as Tom Scragg moved to the wing. Leek, as so often this season, started the 2nd half on the front foot and 3 minutes into the half only a foot in touch close to the Walsall line prevented Isaac Reaney from scoring a try. Then on 48 minutes Walsall's 8 was yellow carded and Leek spent the next 10 minutes in full control but poor lineout and handling again saw Leek come away empty handed as the Walsall defence held firm. Then on 61 minutes, from a scrum on the right Walsall made their 4th try. The ball sped out to the backs close to the Leek line and the centre sprinted over for the score. A good conversion increased the lead to 29-3.

Leek came back again in the 69th minute and pressed Walsall's line before an infringement led to a penalty that led to a further 10 metres that led to Joe newton Taylor being yellow carded. It was then compounded in the 71st minute when the Walsall 8 went through 3 tackles from a lineout and set up a move which the backs duly converted. The conversion was good and the score moved up to 36-8. From the kick-off, Leek retained possession and a Dan Needham break to the Walsall 22 on 75 minutes led to a strong run for the line by Sam Hunt. His score on the right was the only highlight for Leek but he couldn't convert. 36-8.
Still time for one final Walsall try on 78 minutes when the Walsall forwards combined up the middle of the field which led to a penalty in the Leek 22. Walsall opted for the kick to lineout and the resulting maul drive saw the 6th home try scored. The conversion missed. 41-8.
Tom Scragg had a couple of late runs out of defence but the game petered out with Walsall running out comfortable winners.

Leek dropped to 6th place as Crewe won at Camp Hill and Leek will need to be a lot better when the East Birmingham side travels to Esterchem Park this Saturday. Leek's players will be desperate to show they can be more consistent, make fewer errors and play with a more convincing belief in themselves.
KO is at 2-15pm
Author John McDermott